Tabor City native has a passion for pickleball 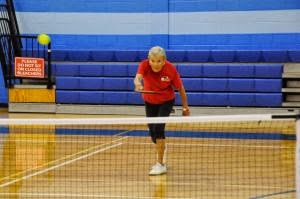 TABOR CITY - Rena Grant has traveled far and seen a lot since her birth on a Tabor City area farm nine decades ago.

Active and fit, now living in Myrtle Beach, South Carolina, after spending most of her life in Pennsylvania, Grant wants to introduce pickleball to her home town, possibly this fall.

For most, introductions are in order, though Grant says the sport - a combination of badminton, tennis and pingpong - is "the fastest-growing sport on the planet."

"Two senators from Washington state came up with it," Grant said. "It was named after a dog named Pickles."