This past fall, Mo Garcia and Keith Shaver organized outdoor league play for three Aiken area pickleball programs from Woodside Country Club, The Reserve and Virginia Acres at Odell Weeks. The matches were played over six weeks with 102 participants on eight teams in MD and WD events. Play was competitive throughout and enjoyed by all the players. The season ended with a social at the Woodside Country Club on January 26 with 90 players/spouses in attendance.

The spring season is set to begin on March 1st and will run through May 31st.
No comments:
Email ThisBlogThis!Share to TwitterShare to FacebookShare to Pinterest

Pickleball is life for Roger Bunting 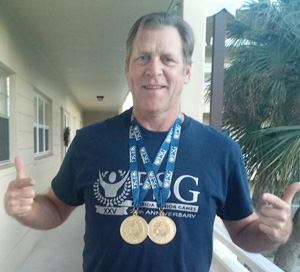 CLEARWATER – The phrase “such-and-such saved my life” is so overused to the point of being a cliché today that it’s hard to separate fact from fiction when it comes to life-altering occurrences.

In the case of Clearwater resident Roger Bunting, there’s little doubt that while the sport of pickleball didn’t technically save his life, it helped him recover from a life-threatening illness and gave him a new sense of purpose.

Bunting, a 57-year-old New York native and lifelong tennis player, came down with a serious case of bacterial meningitis in April 2015, and the infection of the membrane surrounding his brain kept Bunting in the hospital for 25 days, many of them spent in the ICU.

After he was finally released from the hospital and beginning his road to recovery, Bunting found he didn’t have the strength or stamina to play tennis, a sport for which he received a scholarship to attend Florida Southern University and one he had been playing competitively on and off for much of his adult life. So he turned to a sport he had previously written off.

“When I got out of the hospital, I was still a tennis player. I wasn’t sold on pickleball,” Bunting said. “I had tried it with a friend of mine in 2013, and I wasn’t a believer.”

Bunting didn’t think about pickleball, which is played by people of all ages using balls and a paddle on a half-tennis court, for more than a year. But when he needed an outlet for regaining his strength, that’s when he decided to give the (1) fast-growing sport a second chance. 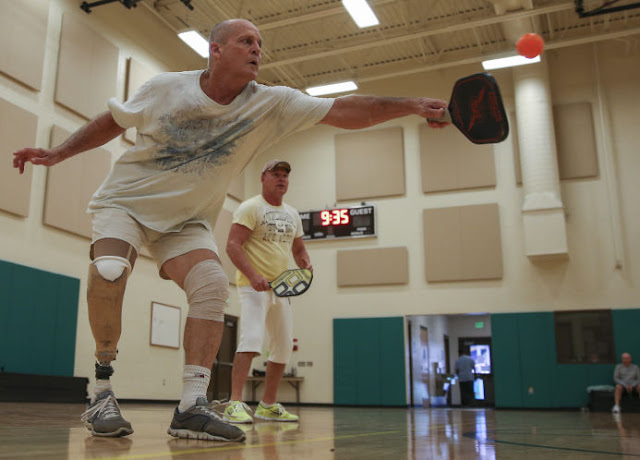 TAMPA — Buddy Hall has had to replace his right foot three times in about three months, all because of his passion for pickleball.

Fortunately, Hall doesn't have to shell out cash every time. The $3,500 foot attachment for his prosthetic right leg comes with a three-year warranty.

A toned man of 58, Hall spends four to five mornings each week dashing about a pickleball court, where the stop-and-start action of the game puts a lot of stress on the carbon fiber foot. He thought pickleball — a combination of tennis, ping-pong and badminton — sounded kind of silly when friends first suggested he play.

Pickleball: The Fun, The Fanfare, The Exercise 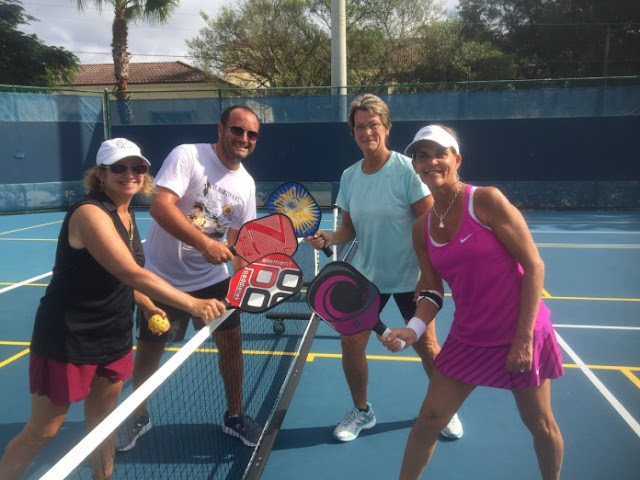 There’s an addictive quality to the newest paddle sport called pickleball.
It’s easy to see why.
The game is played outside (or indoors) the players are congenial folks who are older in years, and you get to exercise at a pace that makes tennis look like a speeding bullet train.
Not that pickleball is a slow pokers game – quite to the contrary – it can have velocity and ferocity. But not the type you see at the US Open. The pickleball way is tamer and more lighthearted.
You don’t see fierceness or yelling on the courts (like in some tennis games). Instead you see players enjoying the challenge of running around a smaller playing field that allows them to spring into action even with a meniscus tear.

Just 21 months after it was organized the Coastal Alabama Pickleball Club (CAPC) registered its 500th Member, Laura Moore of Canada City Michigan. Laura and her husband Dave are coming to the area in February to play Pickleball and enjoy the weather of South Alabama. The CAPC, the 7th largest Pickleball Club in the United States, promotes Pickleball, which is the fastest growing sport in America, by providing a free membership, venues for open play, free instruction, as well as a free Annual Club Tournament. There is a $3 per day facility fee at each of the venues. All CAPC opportunities can be found on the website coastalalabamapickleballclub.com.

On Saturday, January 7, the Gateway YWCA at 1300 S. Main St. (in Winston-Salem, NC) will hold a pickleball tournament to raise funds for the Mental Health Peer Support Center.

The sport of pickleball is not as popular as other sports – yet. It started in the Seattle, Washington, area in the 1970s. It is currently one of the fastest growing sports not only in North Carolina but in America. The game is similar in style to ping-pong and tennis.

The pickleball program started at the Gateway YWCA several years ago has expanded to providing play five days a week with as many as 50 players participating at a given time. Although mostly-popular with seniors age 50 and older, there are more younger people participating.

The Mental Health Peer Support Center is a place for people who are living and coping with a mental health struggle to be together with other like-minded individuals. Event coordinator Michele Todd Davis says because of her work with Green Tree mental health facilities along with personal experiences, this cause became a passion for her.

She says her working with Laurie Coker, who is the head of peer support for Green Tree, led to the birth of the tournament to help fund their facility. Her introduction to pickleball came as she went to attend a bootcamp style workout. Because the bootcamp was not there, she spotted people playing pickleball and wanted to find out more about the game. She said as soon as she put the paddle in her hand, the game became an “addiction” for her. 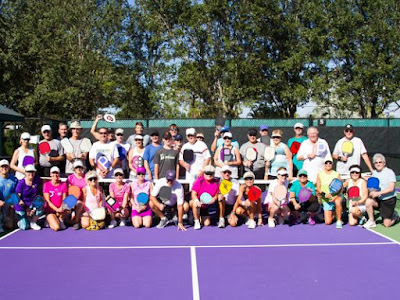 The Pelican Landing community in Bonita Springs hosted its inaugural holiday "Pickle Jar Tourney" on Dec. 29. All community pickleball players in town and their visiting families were invited to play.

Nate Kemler, a USAPA member, organized it all. There were 40 participants using six courts, with many other family members cheering on the sidelines. First place team each won "The Jar", a trophy made from a jar of pickles, and the second place team won coupons for pickles.