We have attached the flyer and registration sheet to this email.  To register on-line, go towww.active.com and put in the keyword Riverbend.  This should take you to the registration site.

We look forward to seeing you there!

Kissimmee, Florida (November 23, 2013) — Players enjoyed a glorious day of amazing Pickleball competition today at The First Annual Cypress Cove Turkey Smash Pickleball Fun Tournament, held today at the beautiful Cypress Cove Nudist Resort and Spa near Orlando.
It was a glorious late-fall day with temperatures in the low-80’s and crystal-clear blue skies, all the better for the twenty Pickleball players as well as more than two dozen spectators and friends who came together to enjoy this new annual event, each to be held on the Saturday prior to Thanksgiving each year.

The morning qualifying round started at 9am and matched players with a new partner randomly against random competitors in each of five games to 11. Player’s scores were recorded from each game and each player’s total score for the morning was used to seed them into the afternoon double-elimination bracket tournament.

Next, players were matched with others who had equal or similar scores and were paired as partners for the afternoon. All 20 players then played a standard double-elimination tournament for Gold, Silver and Bronze medals. Play concluded at 1:45pm after some very exciting finals-round matches and an hour-long lunch break from 11-Noon.

Play was conducted on the four brand-new, regulation, dedicated Pickleball courts at Cypress Cove, installed in October, 2013. The new courts were built in response to the huge growth in Pickleball play at Cypress Cove since the game was introduced in early 2008. Now Cove Pickleball players have first-class courts to play on at all times, and no need to coordinate schedules or share converted tennis courts with tennis players.

When the dust settled today, the following players wound up with shiny new hardware hanging around their necks:

Next up on the Cypress Cove tournament schedule is the all-new Spring tournament, now greatly expanded and re-branded in response to the growth of the tournament and the capacity the new courts provide.

The First Annual Cypress Cove International Nudist Pickleball Open will be held March 1-2, 2014, with prelims qualifying on Saturday and a double-elimination finals round on Sunday. There will be a cocktail reception and group dinner for all players and friends on Saturday night at Cypress Cove’s beautiful Lakeside restaurant, and post-play pool parties both afternoons at the West Pool and the poolside Cheeks Bar & Grill.

Pickleball is gaining steam every month at Cypress Cove, where we play at least five mornings a week year-round in a tropical garden setting beside a private 80-acre lake. Full information on Cypress Cove, America’s most beautiful clothes-free resort, is online at http://cypresscoveresort.com.

For more information on Pickleball at Cypress Cove, contact Mike Sullivan at pickleball@me.com 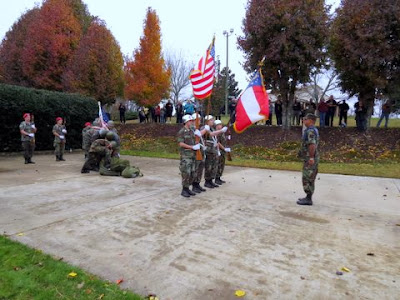 What a wonderful weekend! On Saturday we had a threat of rain and damp courts. Thanks to a group of friends and players, the courts were dried and cleared of leaves in less than 30 minutes. Don Lucas brought his industrial strength blower and Bill Osterhold/Signature Tennis, Inc. donated two additional Squeegees. On the concrete staging area, the Teasley Middle School Air Raiders Cadet Prep. Lead by Commander Santiago Santana assembled at 8 a.m. for drills and practice. About 25 parents and families of the Air Raiders stood in the cold temperatures to proudly watch. This is the fourth year for the Air Raiders to perform and we will present them with a scholarship in 2014 for two members to attend the summer leadership program at Fort Bliss.

For the first year, Director Stephen McCarthy brought 28 members of the Creekview High School Band to perform the National Anthem. They assembled at the school and arrived at the opening ceremony in a school bus! The "country road" of Water Tank saw their first traffic jam as 30 players, Teasley Middle School Air Raiders, local friends, and a school bus made it in to the "Blue Moon Farm" gates! Thanks to the Goodall family - good friends and neighbors - Greg manned the gate, Cole parked cars at the barn, Donna ran the kitchen coffee, and Hannah served banana nut muffins to the band and Air Raiders!

Also present was Ottis Moore, Board Member of the Cherokee County Humane Society. With 100% of the entry fees donated plus the additional annual donation of the Earleys, the North Georgia Pickleball Club donated $3,000.00 for the animals. A check was also presented to Director Stephen McCarthy/Creekview High School Band and Commander Santiago Santana/Air Raiders.
Also attending the opening ceremonies was Cherokee County Commissioner Harry Johnson and Jeff Duncan, candidate for GA State House to replace Calvin Hill.

This is our 7th year of tournament play in this format. For the past six years, we played with only four courts. This year we had 60 players in two days on six new Pickleball courts.

After the opening ceremonies, play began promptly at 10 a.m. and concluded after 2 p.m. A Hearty lunch of Brunswick Stew and German smoked sausage "dogs" from Scott Boys BBQ/Russell and Ann Scott and assorted gourmet cookies from Chocolate Fix/Lynne Wingfield. 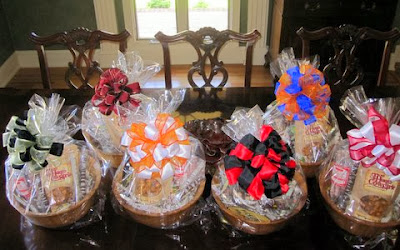 All players received a limited edition long-sleeved "Pickle Bowl 2013" tournament shirt and a good time. Competition was stiff with the winners of the recent National PB Tournament in AZ - Paul Coletta and Stephanie Lane. After the late lunch, players continue to play for at least another hour and everyone drove home tired but happy. 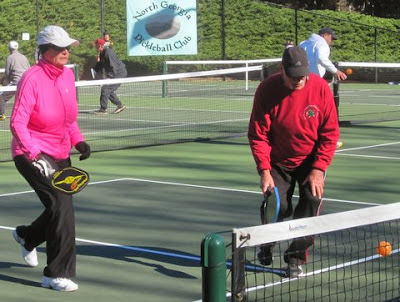 The morning began with crisp temperatures (30 degrees), bright sun, and a light wind (12-15 mph), but by afternoon the players shed their layers of clothes. Special thanks to Rodney and Karen Grubbs/"Pickleball Rocks" for exhibiting their merchandise, competing, and driving from Brookville, Indiana for the two days of the tournament. Also thanks to Jamie Calkin who exhibited his art in the piano studio. Bill Hess was instrumental in tabulating scores and coordinating play. Katie Brown, Jim Cunningham, Carole Hess, and Bill Hess monitored the scoring on both days. And of course, thanks to all players who made this a wonderful tournament.


CLICK HERE to see more photos from the tournament.
No comments:
Email ThisBlogThis!Share to TwitterShare to FacebookShare to Pinterest 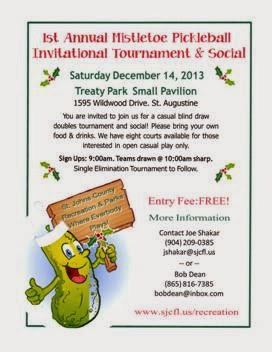 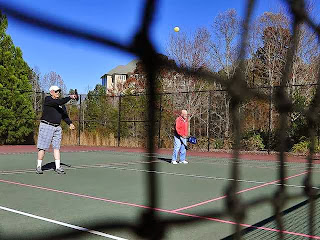 A new sport is sweeping across senior communities and public gyms in North Georgia. The game pickleball, akin to tennis and badminton, frequently attracts seniors because of its smaller courts and greater accessibility. 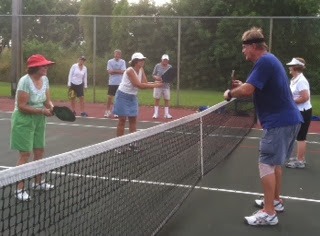 The exciting news is that Pickleball lines were painted on two tennis courts at University Woodlands Park in Boca Raton, FL. This has made the courts multi-purpose and will certainly be an asset for the City's residents to learn and play.

What an accomplishment for Lin Cohen, Liaison for our Pickleball group. Over the past 11 months, people made phone calls or sent emails to the City of Boca Parks and Rec Department. Thank you Diane and Peter Sepetanc, Frank Scida, Linda Dutton, Harriet and Josh Kalin, Marion Lindsey, Mary Ellen Harris, Myra Rubenstein, Rich Harnist and Ursula Hess. It took communication and encouragement from a lot of people to get the courts painted.

Dear Pickleballer:
Wow, as we approach 2014, how the sport has grown in Brevard.  Just 4 years ago we had one Pickleball venue in the county (Melbourne Beach Recreation Center) with half a dozen players.  Today we have nine public venues and another four private facilities that I know about with +/-200 players that play.
Eau Gallie Civic Center is the Space Coasts is the newest Pickleball venue, only open in the last few weeks has been already a very popular spot to play.
Located at 1551 Highland Ave., Melbourne, they are hosting open play Pickleball Tuesday /Thursday &  Friday 1:30-3:30PM in the gym.
$1 per day or $18 per year- Best  Pickleball deal on the Spaces Coast 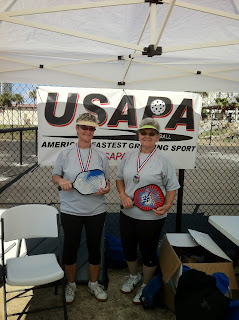 There were 9 players from the Space Coast playing in the Daytona Shores Fall Pickleball Tournament.

Even though a well-run fun tournament, it is played outside and unfortunately it rained most of the day Saturday and it was postponed until Sunday.

Half of the players from Brevard were not able to extend their plans and had to drop out. 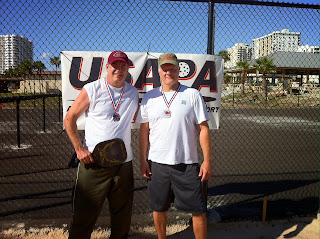 Congrats to Judy & Patty that took first place in the Women's 50-59 category and to Larry and Scott who took silver in the men's 30-59 category.

Good Luck California Bill
Bill Masucci will be flying out to Arizona this week and playing in the Pickleball National Tournament.

Bill will be playing in the 70+ division next week.

Hi to all the Pickleball Players,
The "Riverbend Resort Classic Pickleball Tournament" will have a new look this year!  They have turned their tournament into a three day event, Dec. 6, 7, 8, 2013.  Their courts have a new look with construction being completed before their tournament.
.
We have attached the Flyer with all the information regarding the tournament as well as places to stay, breakfast, Tournament playing schedule, etc.  Also attached is the Registration Form to be sent in.
Deadlines for entry is fast approaching, so please send your registration in as soon as possible, especially if you need to be set up with a partner. We are looking forward to a competitive and fun time!
This is a Tier 3 Sanctioned, Skill Level / With Age Tournament.  The Riverbend Pickleball Club is excited
to host their 5th Annual Tournament!
We look forward to seeing you there!
Your Tournament Directors,
Nancy Meyer / Cindy Eddleman

By Shane Norris - bio | email
WBTW-TV: News, Weather, and Sports for Florence, SC
No comments:
Email ThisBlogThis!Share to TwitterShare to FacebookShare to Pinterest

Pickleball is one of the fastest growing sports in America. At the Waterford community in Leland, pickleball expert, Ryan Manchester gave us the background of the game that many call addictive.

"You can play anywhere indoors or outdoors," said Manchester. "We have four courts on one tennis court and it's great because it keeps people active."
65-year-old Marty Smith normally plays two hours of pickleball every day.
"It's just like table tennis," said Smith. "If you get in to playing table tennis you want to play all the time. Pickleball is the same way."


WECT TV6-WECT.com:News, weather
No comments:
Email ThisBlogThis!Share to TwitterShare to FacebookShare to Pinterest

The Keowee Key Golf and Country club community located in the upstate of South Carolina recently celebrated the first anniversary of our four, lighted pickleball courts. Our program has grown from a handful of players to 140 Pickleball Club of Keowee Key members. See us at http://keoweekeypb.blogspot.com.

Our courts are kept busy with block times every day for various levels of players plus both inter-club and intra-club play. Socials are held on a regular basis.