This was so much fun As you can see by the picture the players really got into the Holi-Daze spirit. This marks the 3rd year for this event and hopefully we'll continue for many more.

Interesting concept that I tried for the 1st time this year. We drew names from two hats and matched partners. It was a more evenly matched format.

Of the 12 teams entered, the winning team of Carol Hoeft and Tom Sosko defeated the runner up team of Sue Greenberg and Bob Wilkinson 14-12. 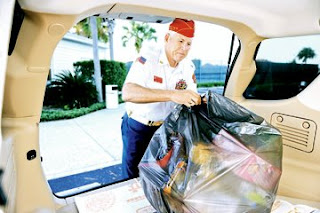 Garf Cooper was well aware that Villages residents go above and beyond when it comes to the season of giving.

Rather than paying an entry fee, participants in the recent advanced ability level 4.0, 4.5 open tournament, hosted by the Pickleball Community Volunteer Group and The Villages Recreation Department, were asked to donate a new, unwrapped toy for the Marine Corps League’s annual holiday effort.

Thanks to players’ generosity, 74 shiny new toys were added to the Toys for Tots collection.

READ MORE
No comments:
Email ThisBlogThis!Share to TwitterShare to FacebookShare to Pinterest

GEORGETOWN -   Pickleball  at the 4th Annual Waccamaw Sports Classic will be held Friday, April 20, 2012 at 10 a.m. at Coastal Carolina University.

Modeled after the Olympic Games, the Classic enables those who are 50, and BETTER, to come together for a day of recreational and competitive sporting competitions. 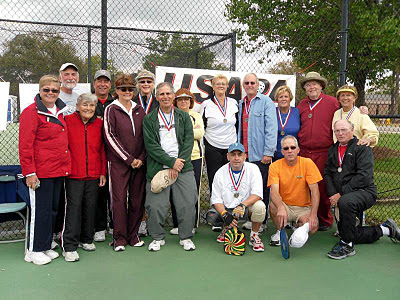 Here are the medal winners from last year's event!!

For more information on the pickleball event, contact
USAPA Ambassador, Rena Grant
843-294-2315
No comments:
Email ThisBlogThis!Share to TwitterShare to FacebookShare to Pinterest

The Bonita Bay Pickleball Club has grown significantly and today they share their story, celebrate with a ribbon cutting ceremony and then enjoy their brand new courts!!

The Scott Green Tournament took place at the courts of the Plantation Community in Leesburg, Florida on November 16th and 17th. The videos below are from that event.

Please see attached registration information packet and registration form. If you have any questions, please feel free to contact your games coordinator, Brittany Rainey at 941.627.1074. Thank you! See you in March! 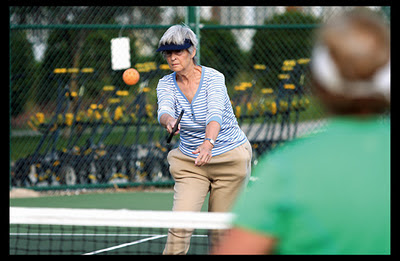 DAYTONA BEACH SHORES - The "tink" of wooden paddles on a bright-orange wiffle ball was unmistakable one recent Friday morning over on court nine at this city's public-access Oceans Racquet Club.

There's more of it going on over at McElroy Park. Every Monday, Wednesday and Friday morning.

It's those pickleballers again.
"My wife, she teaches Zumba, and she calls it 'exercise in disguise,'" said 67-year-old Peter Mitchell of Port Orange between games. "This is exercise in disguise. The tennis players, they might roll their eyes, but the name of this place is racquet club. The sign didn't say tennis club."
The atmosphere isn't hostile at all, though. By all accounts, pickleball, while perhaps garnering scoffs from serious athletes of more established racquet sports, isn't a walk in the park. Played with a wooden paddle and wiffle ball on a concrete badminton court divided by a tennis net, pickleball melds the rules of all those games, with a pace and breadth that isn't quite as taxing as tennis. 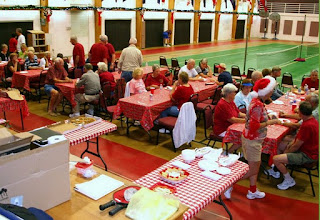 The players at Highland Lakes in Leesburg, Fl held their traditional Pickleball Pizza Party on December 5th, and if you check out the complete story on their pickleball website, you'll see that it was a great success.

Lots of Pizza, lots of Pickleball, new players and lots of fun and laughter. 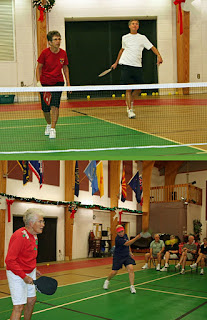 The committee (Manny and Marie Cardoza, Don Gullakson and Harry Yorgensen) sends to one and all wishes for a  "very  Merry Christmas and a Happy New Year" and wants to express their thanks to everyone who donated to the Relay for Life Cancer Research.   READ MORE.....
2 comments:
Email ThisBlogThis!Share to TwitterShare to FacebookShare to Pinterest

Following a five year run in Southwest Florida, the 2011-2012 Florida International Senior Games and State Championships were held in Central Florida’s Polk County. This year, the Pickleball competition was held at the Kelly Recreation Center in Lakeland Florida from December 3-5.  This will mark the 20th Anniversary of the State Championships, which started in 1992. 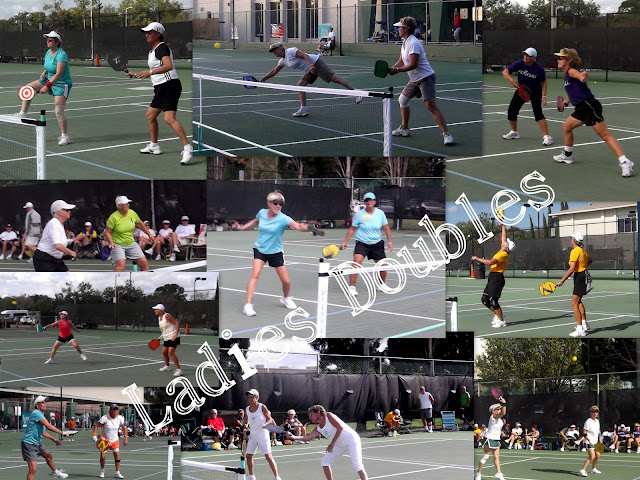 This was a double elimination event, best two out of three games. 3. Games were played to 11 points, but continue until one player or team achievesda two-point margin.   Teams and players were not seeded. Brackets  were  determined by a random draw. 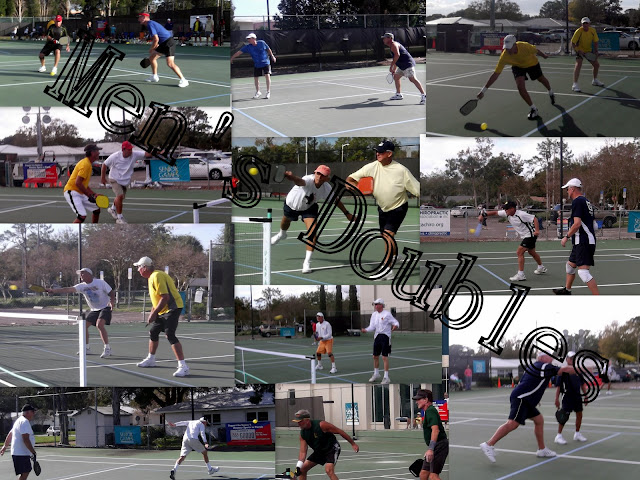 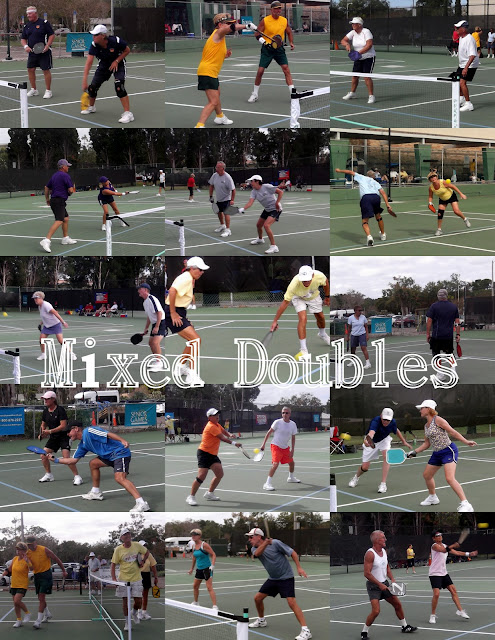 Pickleball had 162 competitors at the Kelly Recreation Center, the largest participation of any event in the State Games!!!

CLICK HERE to check out the complete PHOTO GALLERY
No comments:
Email ThisBlogThis!Share to TwitterShare to FacebookShare to Pinterest 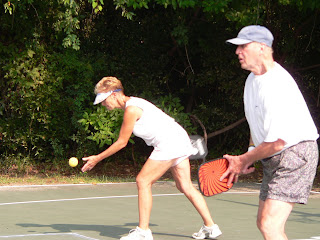 "Generally I see only positive news in the newsletter, not patience trying news. But who knows, perhaps it is time to discuss some of that too.

Some time ago I sent late breaking news that we had permission to paint pickleball lines on tennis courts here on Hilton Head Island. The very next day I went to Lowes and asked them to spec some paint that would be compatible with the tennis court surface. They immediately refused and advised me to go to the county to get the paint specs. I went to the Hilton Head Island Recreation Center who works closely with Beaufort County and they graciously gave me a five gallon bucket of paint that they use for striping various courts on the island.
I no sooner put the bucket of paint in my garage when I received a phone call from the director of the HIlton Head Island Recreation's' director, Frank Soule, that I should hold off on painting the lines because he needed to re-confirm with the county that it was OK to paint the lines on the tennis courts. This of course was a very time consuming process with the ultimate decision being negative.


We appealed the decision to Joe Penale of Beaufort County Parks and Leisure and asked him to meet with us at the courts. He agreed and made an appointment for a Monday at 9:00 a.m. That appointment was subsequently canceled and rescheduled for the following Wednesday. He never showed up. Later, he sent an e-mail saying he was called out of town and couldn't make the meeting. He went on to say that the Beaufort County Parks and Recreation Board had determined that they did not want pickleball lines painted on the tennis courts, but we were free to paint lines on the basketball court and suggested that we could get two pickleball courts on the basketball court. The basketball court is an elementary school size court and will only allow one pickleball court size-wise. Additionally, the court is in poor condition with deep cracks and a 4 inch drop off at the edges. Further, there is no fence to hinder errant balls from rolling into the brush and players must shinny over a 4 X 4 barrier to get the balls. Though we use this court in conjunction with the other two tennis courts with chalked lines on all three courts and a portable USAPA net on the basketball court, this situation is less than acceptable.
So, we continue to appeal the decision to the Beaufort County Board and we are working on other avenues to get pickleball accepted in the community. We plan to send an e-mail to the Island Packet Newspaper to see if they will do a brief introductory article on pickleball and make it known that we have over 100 e-mail addresses for our pickleball roster and approximately 15-22 people showing up every Monday, Wednesday and Friday at 10:00 a.m. to play pickleball. We are not going away!" 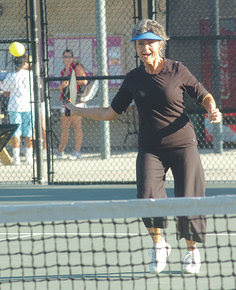 Cindy Moore, who learned to play the sport in Arizona, is hoping to help the sport become a part of the sporting landscape in LaGrange.

A few weeks ago, with the help of some other pickleball-playing friends, Moore began offering free clinics at the McCluskey Tennis Center.

Moore, a long-time tennis player, said she was hooked from the first time she tried pickleball about six years ago.

“I was a tennis player, and still am,” Moore said. “I’d play tennis, and go play a little pickleball. And then it got to be more pickleball and less tennis. And it’s gotten more and more. It’s just addictive.”

Now, Moore serves as a Georgia ambassador for the US Pickleball Association, and it’s a role she takes seriously as she looks to introduce the sport to as many people as possible.