HOLLY HILL (FL) — The City Commission on Tuesday will vote on economic incentives for a proposed recreational sports facility at Hollyland Park that some say could become the “Wimbledon of Pickleball.”

An Ormond Beach couple has offered to donate $3 million to build the planned 24-court complex at the city’s Hollyland Park.

It would be the second-largest pickleball facility in Florida, trailing only a 50-court facility in Naples.

The target opening date for the Pickleball Daytona of Holly Hill complex is early 2020.

Rainer and Julie Martens are asking the city to contribute $1 million in Community Redevelopment Area funds to cover the project’s infrastructure costs.

On a hot sunny afternoon in November a group of volunteer members and our own IPTPA certified instructors gathered together at Pocahontas Park in Vero Beach for the purpose of introducing pickleball to eight local physical education teachers.

Pickleball University decided earlier this year that we wanted to take the sport of pickleball into our local schools in Indian River County, so you may ask how did we make this happen?  Our club's Board of Directors lead by club president, Mari Colacino, identified a small core group of our players to form a "Schools/Juniors" committee.  Together they developed a plan to raise money, purchase equipment, identify and train volunteer club members who assist our professional instructors.

Over time our club members started reaching out to friends and friends or friends involved in our local schools at all levels to seek out teachers and identify school physical education programs that expressed some interest in pickleball.  Sounds easy enough right?  About as easy as hitting a successful around-the-post pickleball shot!

The group of PE teachers that came out to our courts on that hot November afternoon had a great time learning what pickleball is all about.  To a person they expressed a sincere desire to teach our great sport to their students.

Our committee hopes to continue its good work into the new year by expanding our youth programs i the district and beyond.  The $1100 we raised were used to purchase w24 paddles, four portable nets, dozens of balls and a portable storage box to be circulated and used by our schools in Indian River County.  Our club's mission now is to grow and strengthen our partnership with the school district and together pass our love of this great sport onto the students.  Our vision is to have every child be able to learn how to play pickleball.  It is a sport that can be played for a lifetime! 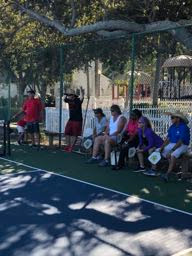 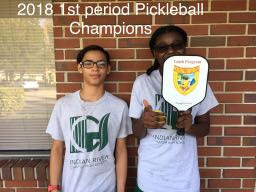 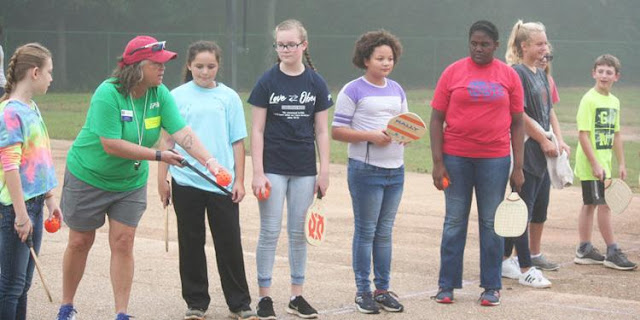 Members of the Enterprise Parks and Recreation Department made a stop at Pinedale on Oct. 16 to introduce students to pickleball, a unique sport that combines elements of tennis, badminton and table tennis.

According to Enterprise Parks and Recreation Programs Coordinator Guillian Hunt, the department began offering pickleball as an activity last year and it has gained popularity since.

She said this is part of an initiative to introduce the sport to students at local schools as an alternative to typical sports such as basketball, football and baseball.

“I learned pickleball when I was in physical education classes in Virginia, and it was something different from all the sports you were doing over and over, every day, each year,” Hunt said. “It ended up being something that my whole family enjoyed and became a great family sport for us.”
CLICK HERE to read more. 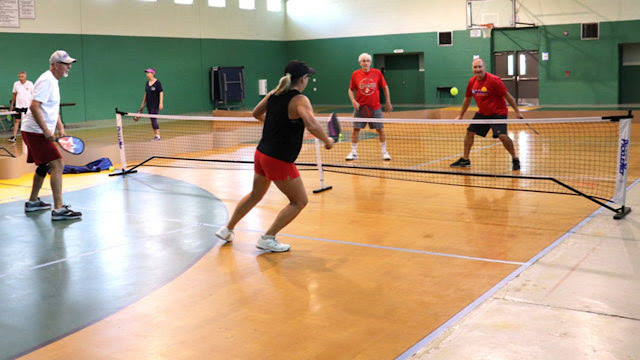 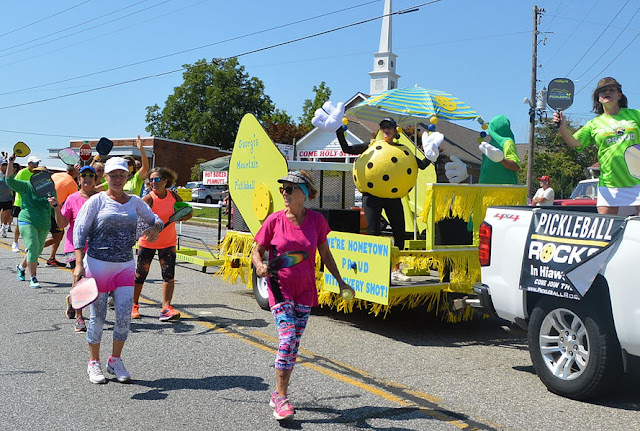 These games were both qualifiers for the National Senior Games in June, 2019, in Albuquerque, New Mexico. 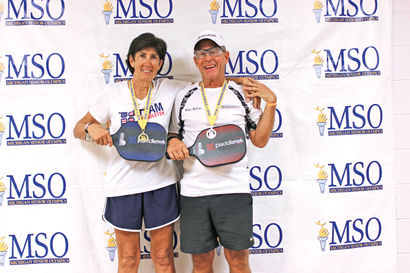 Rookie gets schooled in a game of pickleball


A little over a month ago, a friend and I were working out at a local YMCA and could not help but notice how much fun a big group of people were having playing what looked like a smaller version of tennis in the gym.

So we went in, were handed a set of paddles and given a crash course on pickleball.

I’ve been hooked ever since.

In fact, it has become a new facet of my fitness journey — one that has seen me drop 115 pounds in the last year and a half. That weight loss helped my agility on the small courts — enough to chase that little whiffle ball down for corner shots.


Fast forward a few weeks to an email inviting me to come out for a morning of pickleball at Sun-N-Fun RV Resort in Sarasota, a chance to experience the outdoor game for the first time. 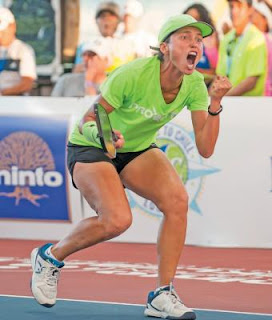 More than 100 players and spectators, including marrow donors, transplant recipients and volunteers joined together to help those battling blood diseases and in need of a transplant find their lifesaving marrow matches.

For many patients suffering from leukemia, lymphoma and other cancers there is hope of a cure through a bone marrow or blood stem cell transplant. Every three minutes someone is diagnosed with blood cancer, but 70 percent of patients do not have a related match and must search the worldwide registry for a volunteer donor.

Pickleball tourney draws players from around the South 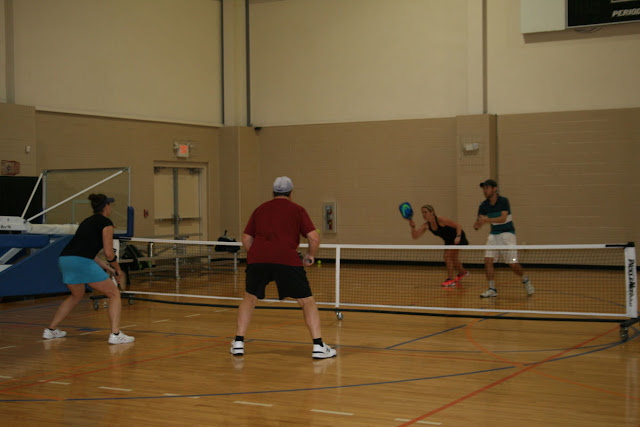 More than 100 players from as far away as Macon and Birmingham, Alabama, took over Thornton Recreation Center for the inaugural Rome (GA) Pickleball Classic.

The four-day event wrapped up Sunday.

“It’s one of the fastest-growing sports in the country right now,” said organizer JP Selle, the tennis director at Coosa Country Club.

Over the past few years, it has become a staple at both the country club and at Rome-Floyd Parks and Recreation facilities.

Played with a paddle and a plastic ball, pickleball combines elements of tennis, ping-pong and badminton. According to Lisa English and Logan Yerbey — who trounced their finals opponents in mixed doubles — it’s the sport Baby Boomers have been looking for.

What makes it such a great fit?

The AAU Englewood Chill Blast Pickleball Tournament made history this weekend as the first-ever pickleball event hosted for AAU members. (What the heck is pickleball?!) More than 180 athletes from 31 states - ranging from age 19 to 75 - competed on Florida's west coast as part of the Florida Pickleball League.

'We were so excited to host the Inaugural AAU Pickleball Tournament,' said Sindee Snow, AAU Pickleball National Chair. 'Our best success comes from the individuals who participated in the event. We are looking forward to growing the sport in all ages through the country using the AAU platform.' 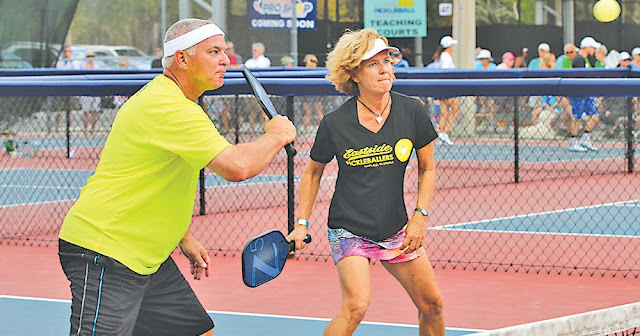 The Southern Tropics Tournament Series kicked off in December with the Florida State Pickleball Championships. The Winter Classic represents the second leg of the series.

Five hundred ninety-two pickleball players competed in the East Naples Winter Classic held January 26th-28th at East Naples Community Park. Players of all ages and skill levels ranging from 3.0-5.0 participated. The organized event, well-staffed with volunteers, ran smoothly and on time as all 44 pickleball courts were busy with action. Although the blustery days proved to be a bit of a challenge, the players persevered…and those who persevered the most came away with a medal. 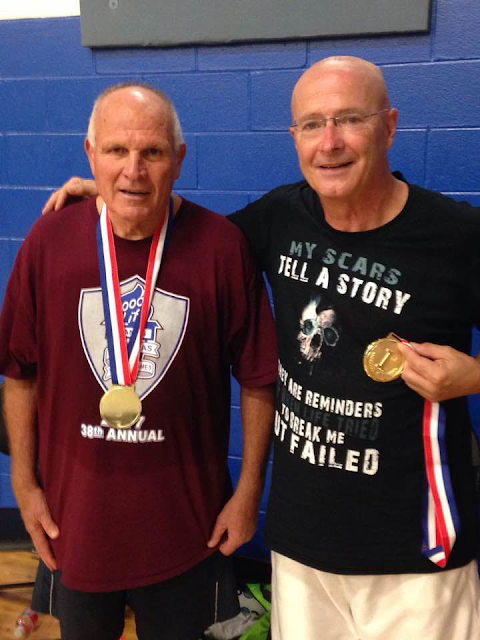 ST. PETERSBURG – Speaking to Dean Refakes for the first time is like talking to an old friend.

The 70-year-old part-time St. Pete resident and Chicago native has the relaxed and upbeat demeanor of a favorite golfing buddy or dinner companion, as he happily recalls tales of his athletic exploits and his medical setbacks, both of which there are many. Refakes, known as “Clean Dean,” also intersperses his conversations with comments about his love of life and especially for his three daughters, whom he raised following a divorce and calls “the apples of his eye.”

That positive attitude has helped Dean overcome a litany of physical setbacks, from broken bones to balky knees and hips, to become a high-level baseball, basketball, tennis and now pickleball player, as well as a symbol for perseverance and determination for people of all ages.

“I’ve had a very nice life, and I try to enjoy it,” Refakes said shortly after winning a gold medal in pickleball at the 2017 Florida Senior Games in Clearwater in December. “My daughters are healthy, they graduated from college, and I’ve never had a problem with them. I’ve been blessed.”