From Leesburg to Steamboat Springs to Daytona Beach Shores

Just another example of how pickleball perks interest across the country!


If you all remember, we did a story a few months ago about Jay Readinger, who while visiting the community of Highland Lakes in Leesburg, Florida, was introduced to our great game of pickleball.  Jay and his wife Mary Lou Gallup relocated to Steamboat Springs, Colorado,  and Jay became the USAPA ambassador for that area.  Since then he has sparked significant interest and growth in the game.  In fact,  Florida residents George and Anita Rimler,  recently visiting Steamboat Springs found Jay and his group  through USAPA's places to play!
Below is a link to a great article from SteamBoatToday.com that featured Jay's Pickleball group while George and Anita were visiting   What's even more exciting is that Anita will be representing Daytona Beach Shores as our new Florida ambassador and she and George will begin to introduce and promote pickleball in their community.
Pickleball enthusiasts seek to spread sport in Steamboat
SteamboatToday.com
Story and  photos b yJoel Reichenberger, Saturday, July 16, 2011
﻿﻿
﻿﻿﻿﻿ 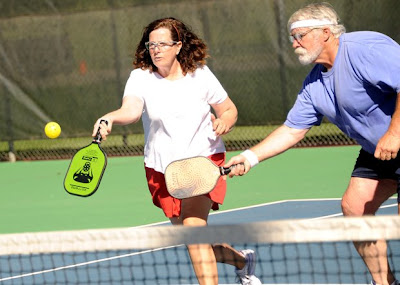 Mary Lou Gallup and Jay Readinger rush for a return Friday while playing pickleball on the tennis courts at the base of Howelsen Hill in Steamboat Springs. The pair learned the sport in Florida, where it’s hugely popular in senior citizens communities, and is trying to help it catch on in their new home of Steamboat.
﻿ 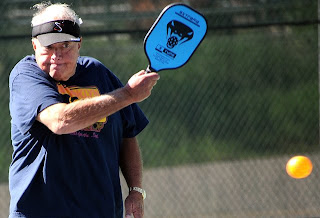 ﻿George Rimler eyes a return Friday while playing pickleball at the Howelsen Hill tennis courts in Steamboat Springs. Rimler and his wife, Anita, are spending a month in Steamboat on vacation.
CLICK HERE FOR COMPLETE ARTICLE
No comments:
Email ThisBlogThis!Share to TwitterShare to FacebookShare to Pinterest 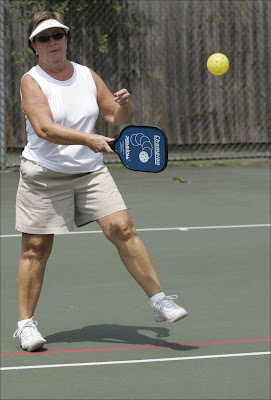 Ginger and Jerry Goodin developed a love of the fast-growing racquet sport with the funny name while wintering in Sarasota, Fla.

Now the retired couple want to play it in their hometown. They even prevailed upon Petersburg officials to modify the city's single tennis court at Saline and Walnut streets so the game could be played there.

CLICK HERE to read the full article
No comments:
Email ThisBlogThis!Share to TwitterShare to FacebookShare to Pinterest

National Senior Games - Have You Registerd Yet?

2011 Winter Games
National Senior Games Championships
September 28 - October 2, 2011
USAPA Sanctioned Tier 2
This year the National Senior Games  will be played in a brand new
State-of-the- Art Facility
Gates-Chile High School
Rochester, New York
In addition to some great competition from across the country, enjoy our Happy Hours each day after the games with drinks, food and entertainment, and  opportunities for excursions to places like Niagra Falls, Finger Lakes Wine Trails and more..........
CLICK HERE TO REGISTER NOW
Registration must be postmarked by September 3, 2011
﻿
No comments:
Email ThisBlogThis!Share to TwitterShare to FacebookShare to Pinterest 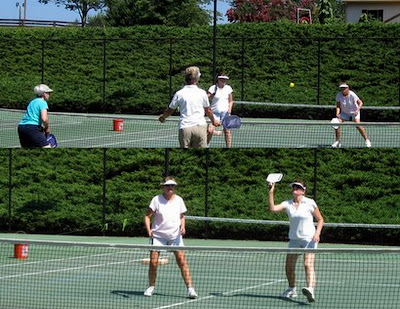 Submitted by Ann Earley
North Georgia Picklebal Club
This club always finds something creative to do on the pickleball courts.  These pictures are from the final match of the the very first
"Women's Twins Tournament."

Now, I did inquire as to who the "twins" were in the club.   " What do you mean - Judy and I don't look alike...  OK - Of course I should have known." Didn't you see the movie "Twins" with Danny Davito and Arnold Schwarzenegger?"

Ann says it was a hard fought match, but  she and Judy were beaten soundly 11-3. 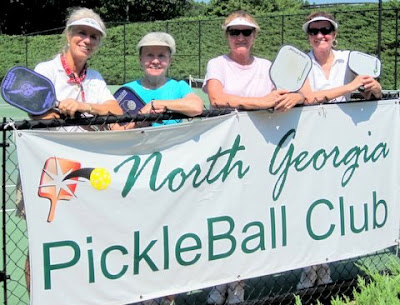 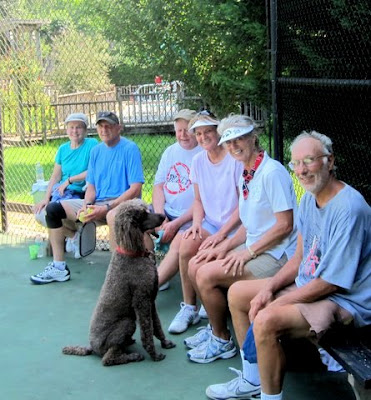 And after the match Pam finds some tired pickleball players, enduring the heat and humidity: Judy Vonesh, Steve Dunn, Ken Riordon, Pat Dunn, Ann Earley, Tom Earley and Bocce, our pickleball mascot.
.
Now - rumor has it that Tom Early has one of those "significant" birthdays coming up in about a week.  I'm not going to get in any trouble by telling you which one!!  But I understand the pickleball club will be celebrating with a catered dinner, singing and karaoke. and a gourment specialty cake from  "Chocolate Fix".All pickleball players are invited to attend in the appropriate 50's or 60's attire.

And then stay tuned as we draw closer to their  Annual Fall Pickleball Tournament!!!
No comments:
Email ThisBlogThis!Share to TwitterShare to FacebookShare to Pinterest 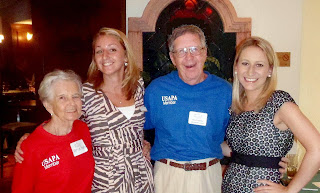 Each year more than 6000 Florida youth gather for two days of fitness and fun! Full of excitement and energy, festival participants have the opportunity to get hands on experience and develop skills in over 40 different sports clinics.
This year Florida ambassador Dick Freshley and his wife Verna ( pictured here with two KFF staff members) took on the challenge of introducing pickleball to these young folks. 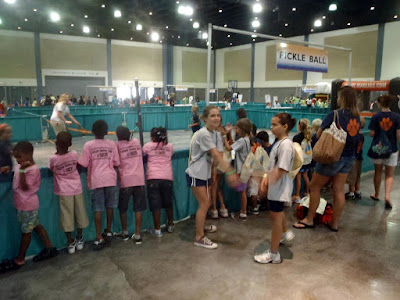 "Today we finished our first day at the Kids Fitness Festival.  There were thousands of kids but most of them very young, under 10 years.  At first I tried to give some basic instruction and have a little informal volleying. Tha tdidn't work at all.  We were shuttling in four players every ten minutes. Even at that there were always 20 or more waiting to get on the court. If the group was very young I tried to encourage them to try another activity. Sometimes this worked, but not always. 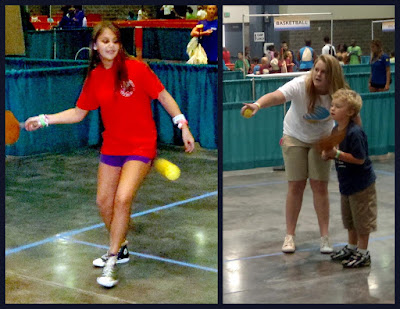 The groups came in school buses from day camps....... for the most part the kids enjoyed the activity and many came back a second and third time. If nothing else they were enthusiastic. There were dozens of things to do that I thought were more appropriatefor them and they wouldn't have to wait either. So, I was surprised by their persistence."

Dick and Verna also said that they had a lengthy interview with a Sun-Sentinel reporter and photographer...............maybe well get to see that in print or on the air!!!

Thank you Dick and Verna for taking the time to bring joy to our Florida youth and to introduce them to our great game!

CLICK HERE for more pictures from our pickleball day with the kids.
No comments:
Email ThisBlogThis!Share to TwitterShare to FacebookShare to Pinterest

We're enjoying lots of outdoor pickleball this summer in beautiful upstate NY and played in the Empire State Games in June. Last weekend, Fred and I played in the 2nd annual Rochester Picklefest, which was a USAPA sanctioned tournament this year with over 90 participants. We even had one junior player who came all the way from Myrtle Beach!

It was a great turn-out and it's hard to believe that two summers ago when we wanted to play here, we only knew 4 other pickleballers. Thanks to the USAPA website, people found us. Then we got connected with even more folks on the other side of the City, thanks to our two local ambassadors, Dave Thomas and Linda Palma. We now have over 250 active players on the Rochester email distribution list.


When I asked Dave Thomas, if there would be a membership booth at the Picklefest, he said, "Yes, you're in charge!" So I let everyone know they'd have an opportunity to join the USAPA at the tournament, gave them information about the benefits of joining, and suggested they bring their checkbooks. I also offered to pay the postage for their applications and gave out free mini pickleball key chains to new members. Twenty-one people signed up! We now have 53 members locally, which represents over 20% of our group. Soon, the email roster will feature bold blue USAPA letters after their names, which I hope will generate more interest.

The National Senior Games are coming to Rochester again in September. This year, they will be played at a world class venue. The publicity will be wonderful!

CLICK HERE for venue and registration information:
No comments:
Email ThisBlogThis!Share to TwitterShare to FacebookShare to Pinterest

A lot of the snow-birds have gone north, but they still get about 16 regular players out on the courts to play.   Come join the group!!