The national championships in a not-so-obscure-anymore sport return to Naples starting this Sunday, and tournament organizers and county officials expect the event to be bigger and more beneficial in Year 2.

The Minto U.S. Open Pickleball Championships begin Sunday at East Naples Community Park. The event held its media day on Friday, and excitement resonated throughout the park – from players, officials and county commissioners who see pickleball as a boon to Collier County.

Pickleball, a hybrid of tennis and ping-pong played on a badminton-sized court, has been a favorite of retirees for decades. However, the first organized national championship tournament was last year at Naples. More than 800 players from around the country, even a group from England, participated.

The U.S. Open has seen a 40-percent increase in players in just its second year. More than 1,300 pickleballers are signed up for this year’s tournament.

To accommodate the increased interest, the Championships expanded from five to seven days. The event runs from Sunday to April 29.

US Open Pickleball Party in the Park 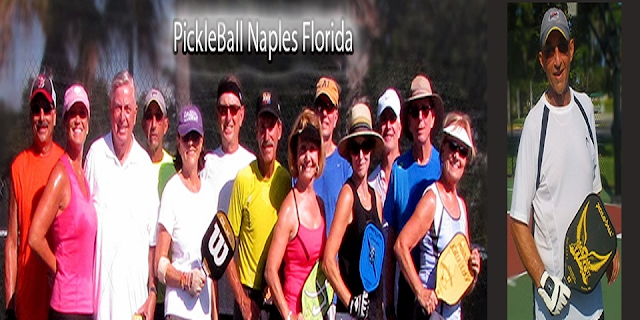 Get a sneak peak of the 2017 U.S. Open Pickleball Championships at the free Party In the Park on Saturday, April 22nd. Check out the New Product Demo Spectacular with all the latest pickleball gear, watch amateur and pro athletes on the practice courts, enjoy live music, and learn why millions of people are getting into the sport of pickleball. Pickleball courts will also be open for public play.

A 12 court pickleball stadium has been completed at Sundial Beach Resort & Spa, adding to the lineup of resort amenities and public offerings. The Plexicushion system courts provide tournament-grade facilities in a pristine, waterfront setting accessible to both resort guests and the public.

For a limited time, introductory annual memberships are being offered to the public for a fee of $150. Public court time (based on two hours of play) is priced at $10 and includes equipment rentals. For groups looking to hone their skills while enjoying an island retreat, the resort offers custom pickleball vacations. 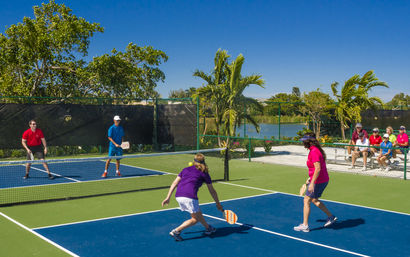 The 4th annual Low Country Pickleball Classic is scheduled to begin next week and will feature men’s, women’s and mixed doubles competitions, a Lowcountry boil and a dancing pickle.

This year’s tournament will be bigger than last year’s event, according to tournament director Reuben Oder: 216 players from 16 states have registered to date.

Players and enthusiasts from all over the Southeastern hemisphere and Canada trekked to the Cape Fear National Golf Course to play in the Dink for Pink Pickleball Tournament in Brunswick Forest! Attaining great success, the tournament that took place from March 15th through the 19th raised an impeccable $13,000 for the Lump to Laughter organization. 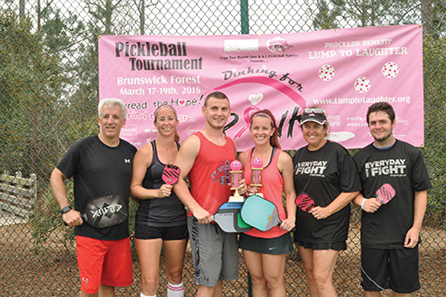