Winter Garden, Florida is having its first Pickleball Tournament. Dates for the tournament are November 8, 9 2014.  On-line registration is open and can be accessed by going to www.pickleballspecialties.com tournament page and click the Register Now button for the Winter Garden tournament.

This will be an age level/skill tournament. We are looking forward to a great weekend of Pickleball in Winter Garden!   Hope to see all of you there! 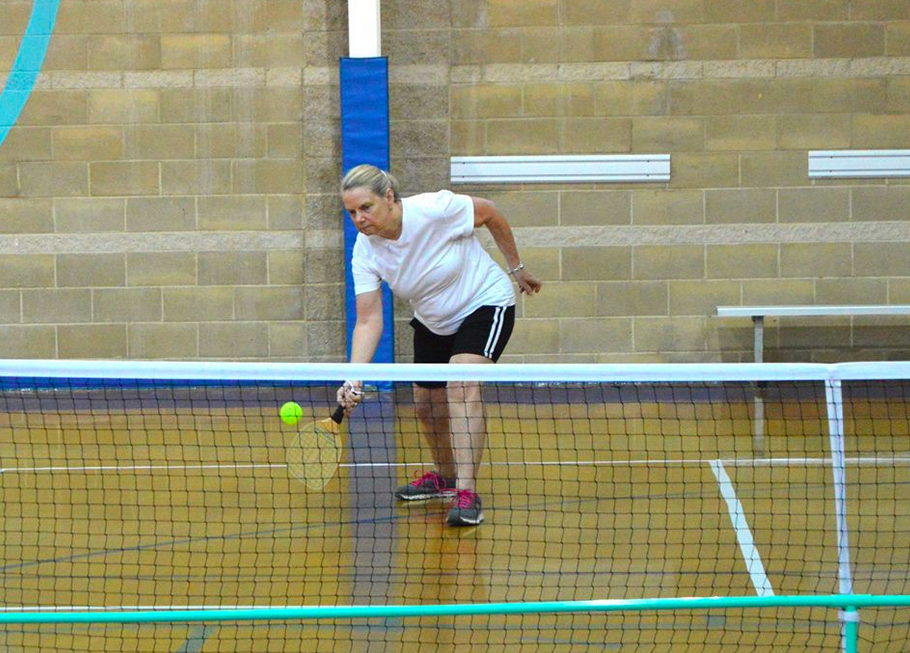 The pickleball passion has now reached the city of Alpharetta.

This sport, which is growing in popularity due to its easy learning curve, is a combination of tennis, badminton and Ping-Pong and can be played by residents of all ages.

Alpharetta Recreation and Parks Department will offer pickleball at the Wills Park Recreation Center on Tuesdays from 9:30 a.m. through 2 p.m. The center sits at 11925 Wills Road.

Everyone is welcome to participate in this free program and equipment will be provided for athletes.

Charlotte area pickleball enthusiasts now have two new indoor pickleball venues with the expansion of pickleball to Carolina Courts (see below). Each of the two Carolina Courts facilities will begin pickleball on November 3, 2014. Each facility will feature 4 indoor courts and will offer pickleball from Monday thru Friday from 10:00 AM to 2:00 PM. In addition to regular weekly play, Carolina Courts will host two pickleball tournaments. The first, the Holiday Smash Round Robin, is scheduled for November 22nd. The second tournament will be the USAPA Atlantic South Regional and will occur in March of 2015. If you would like additional information, please check their web site at http://www.carolinacourts.com or the USAPA tournament link at www.usapa.org. North Carolina Ambassadors Joe Borelli, Joannah Michael, Dan Kiurski and Bob Nibarger are tournament hosts. Please email ncpickleball@aol.com for more information. 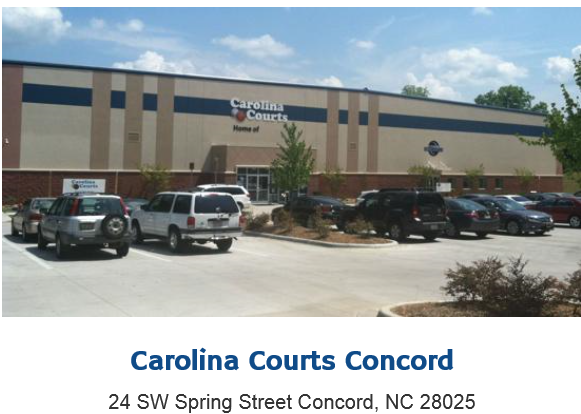 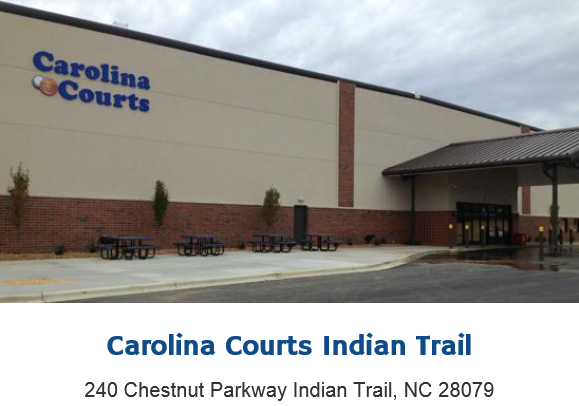 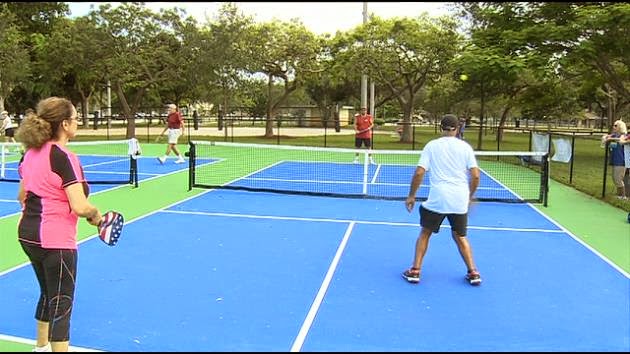 There's a new sport that's part tennis, part ping-pong and a whole lot of fun. It's called pickleball, and it's a real hit in South Florida. Deco's Donovan Campbell got himself in a real pickle and took a swing at the story.

Jennifer Arocha: "I thought it was a weird sport, and it had a really weird name."

Regardless of the name, the pickle ball craze is here to stay. 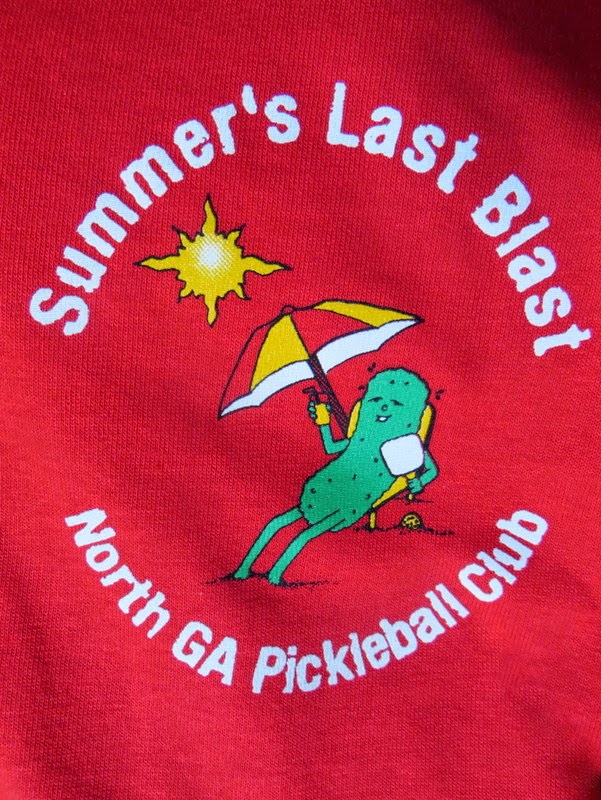 For the first time, we started the tournament on Friday with open play from 2 PM until 6 PM. At 6:30 PM Tom & I sponsored a Mexican buffet catered by Tecali Grille of Canton and entertainment by "Tunes by Toni". A few players enjoyed the pool and everyone enjoyed the "'60s music" and karaoke. A "flash mob" composed of Ann Earley, Pat Dunn, Katie Brown, and Carole Hess in Sheriff Joe Arpaio pink prison boxers assembled around the pool singing "Pickleball Rock" . A good time was had by all!


On Saturday morning, registration began at 8 a.m. with players from South Dakota, New Mexico, Philadelphia, Florida, Georgia, Tennessee, South Carolina, and North Carolina,  As we have for the past eight years,  we gave each player a long sleeve T-shirt with our tournament logo, breakfast fruit, water, and lunch from Scott Boys BBQ of Macedonia.


Our Opening Ceremony began at 9:30 a.m. with the Cadets of the Sky Patriots Leadership Camp featuring the Troops of Fort Blitz Academy lead by Commander Santiago Santana.  The Middle School cadets performed a gun drill and reenactment of the Iwo Jima Memorial before their color guard presented the flag. The Creekview High School band led by Stephen McCarthy played the National Anthem, then the games began! 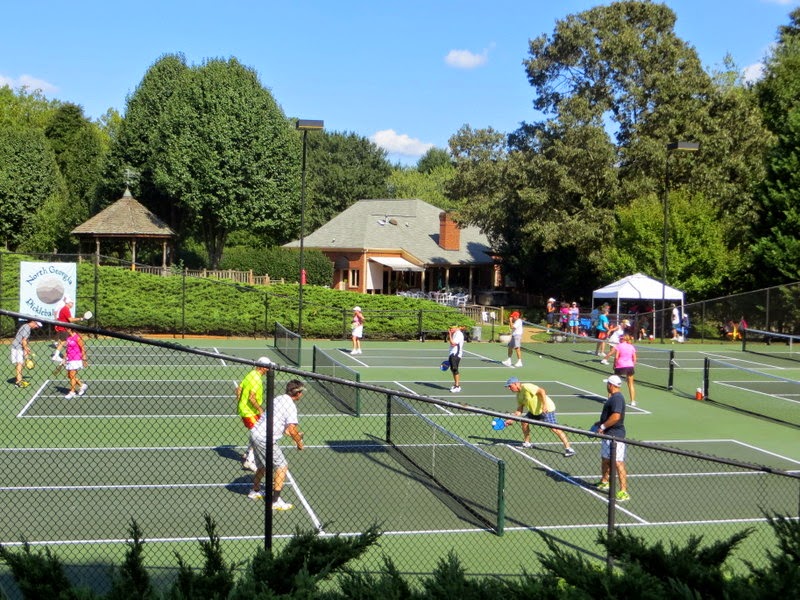 
Rodney and Karen Grubbs of Pickleball Rocks had a booth with all of their paddles, clothing, etc. in the stable hallway along with a table display of Pickleball jewelry by Cindy Moore. The North GA Pickleball Club  displayed their "Onesies", towels, and pink boxers to benefit various charities. The new Pickleball/Tennis ladies sports apparel designer Lillian Reid of Doue' also displayed several racks of her new Fall line in the piano studio.


We appreciate all the players who attended the tournament and club members who volunteered their time and energy. See you next year!
CLICK HERE to view all photos. 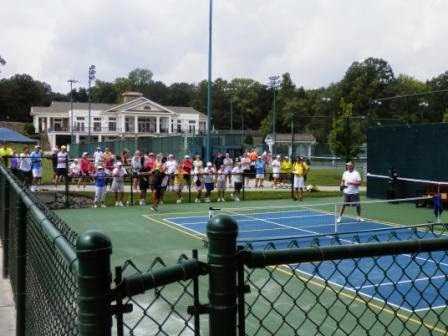 launched their Pickleball Opening Day. The event turned out to be a huge success. We had snacks (including pickles donated by Mt. Olive), free beer, sunshine, and more than 50 people in attendance. We arranged for four members of the USAPA to come to OPRC and educate the staff and members of the club about the fastest growing sport in the country, Pickleball. They gave us a brief explanation about the history of the game, the rules and strategy of the game, and how the game is scored. Then they played out some points so our members could see the game in real time action. After that, it was time for everyone to play! Members were split into groups and sent to a court where they rotated playing games to 11. Each court had an experienced Pickleball player guiding them through the playing and scoring process. It only took a few games before our members began to grasp the game quite well. After that, it was all laughs, high-fives, and trash talk. After Saturday’s success, we are confident that Pickleball is going to continue its growth here at Olde Providence Racquet Club.
No comments:
Email ThisBlogThis!Share to TwitterShare to FacebookShare to Pinterest

The “Pickleball” passion has now reached the City of Alpharetta. This trending sport is a combination of tennis, badminton and Ping-Pong, all rolled up in one and designed to be played by all ages.

The City of Alpharetta Recreation and Parks Department will offer Pickleball at the Wills Park Recreation Center on Tuesdays from 9:30 AM through 2:00 PM beginning September 23. Everyone is welcome to participate in this free program. Equipment is provided.

For information: 678-297-6140 or activeadults@alpharetta.ga.us.
No comments:
Email ThisBlogThis!Share to TwitterShare to FacebookShare to Pinterest 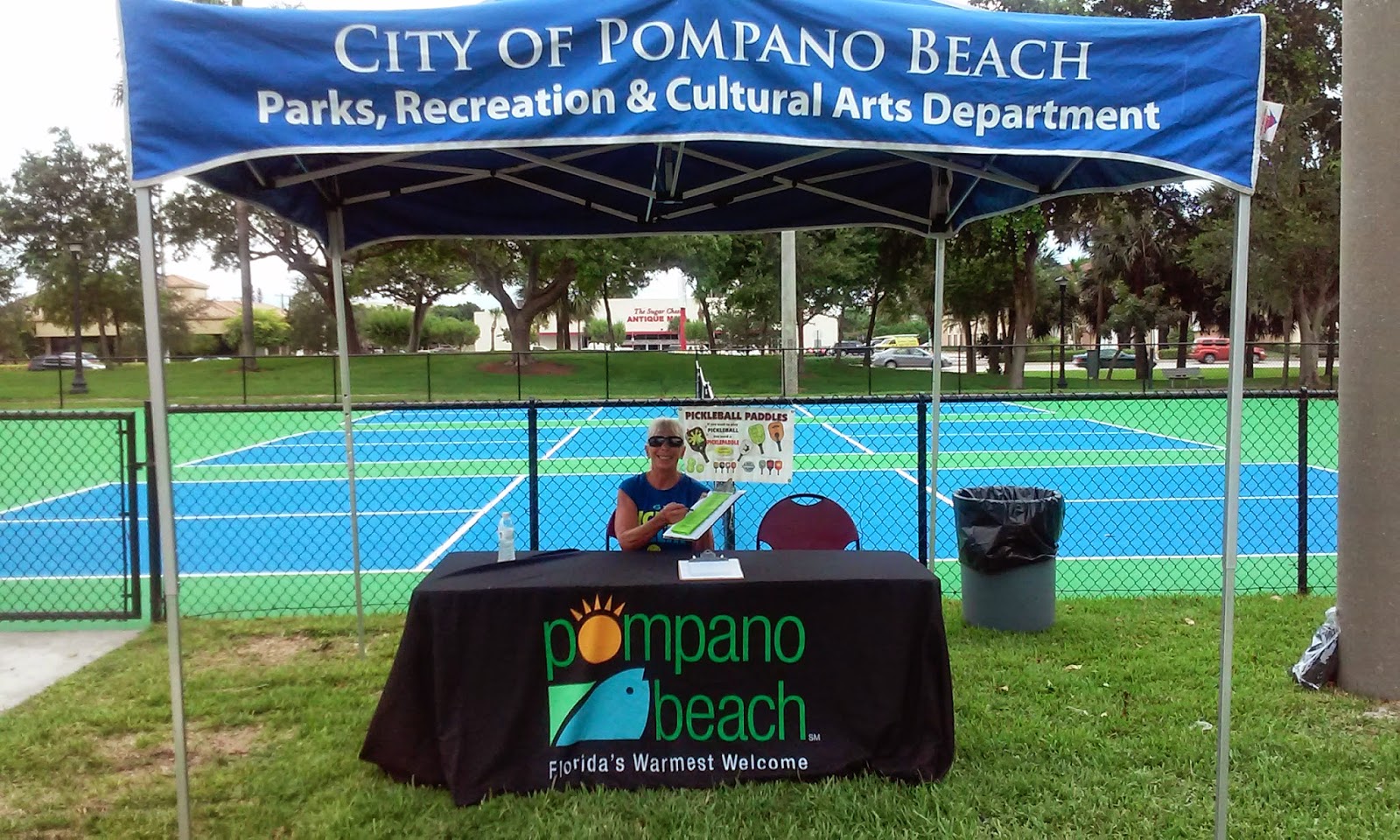 We had a great turnout despite the bad weather. Over 30 people attended with 5 Instructors teaching the sport of Pickleball. I want to thank Barbie, Jan and Michael and Jennifer, Lowell, Dennis, Alex and Sonia, and most importantly the City of Pompano Beach for building 5 Permanent Pickleball Courts.

My wife and I are traveling throughout the Western states this summer and I have been able to play Pickleball in most every state, at least up until now. We are in Torrey, UT, and there is no pickleball for miles. Yes, there are pickleball dead zones in the U.S. But wait....there are parking lots, basketball courts and other compacted services. Yes, pickleball is alive (well in the abbreviated and creative sense, of course). All it takes is some creativity and the game can go on. In this case, if I don’t have the room for or want to set up a portable net, I simply set up two bicycles for a net (set seats to 34 inches), put a small rope or tape between the bike seats for a net, carve out a kitchen area with chalk and I have an instant “dink court." The dink game begins with a serve that must land over the net into the no volley zone (or kitchen) of your opponent. The opponent must return the ball into the kitchen and play goes back and forth in the kitchen until the point is won. We play regular games to 11. Games can be modified to be face-to-face dinking, cross-forehand dinks, cross-backhand dinks, and so forth. If you want to shorten the game, you can play “rally scoring," meaning a point is scored on each volley by either player who wins the point. So, in summary, all you need is a tape measure or pre-measured ropes to measure boundaries for a kitchen, kid’s playground chalk, a parking lot or basketball court, and two bicycles and something for a string net. Now you have an instant “dink court." You will be amazed how quickly you can be playing. When finished, you can then take a bicycle ride to keep your legs in shape. Hope this tip helps you keep in shape while traveling. I will see you on the court. 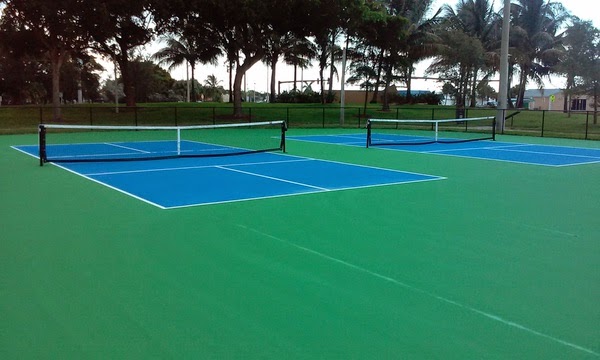 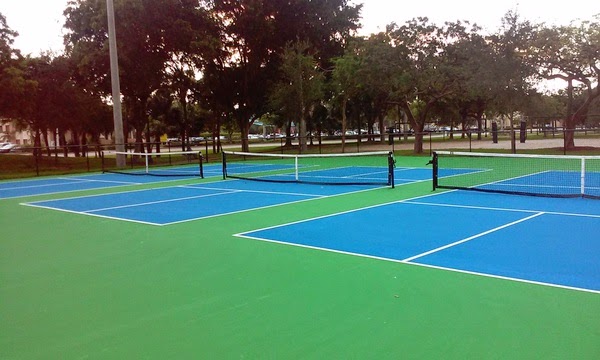 The Showcase is presented by South Florida Pickleball and the City of Pompano Beach.

The Myrtle Beach Seaside Classic is being held on Friday, September 26 and Saturday, September 27, 2014. There will also be a Dinner/Dance on Thursday night, September 25, which will have a DJ, a great menu, and lots of great door prizes!

The mail-in deadline for this tournament is September 8 and the on-line deadline is September 14. You may go to www.pickleballspecialties.com and go to the tournament page and there is a Register Now button for on-line registration. There are also forms that you can print and mail.

We hope that you will join us for two days of great pickleball! The tournament is an outdoor tournament and we will use the yellow Dura ball. You will all enjoy the hospitality of the Myrtle Beach players, volunteers, and recreation staff. All entrants will receive specific tournament information by email after the registration deadline.

We look forward to seeing you there!!