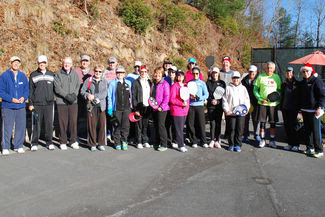 Recently, more than 30 players participated in a pickleball fundraiser at the Connestee Falls Pickleball facility. The event raised nearly $2,500 and two truckloads of warm winter clothes and blankets for Sharing House, a local ministry that provides food, clothing and assistance for neighbors in need.

Broad Street Wines donated a gift box of wine that was raffled off and won by Dennis and Rita Shardell.

Earlier this fall, the Connestee Falls Pickleball club hosted a tournament that was part of the 26th Annual CF Scholarship Fund Program. The Pickleball tournament raised about $9,000 of the more than $70,000 that will be used this year to provide college scholarships for Transylvania County High School students. 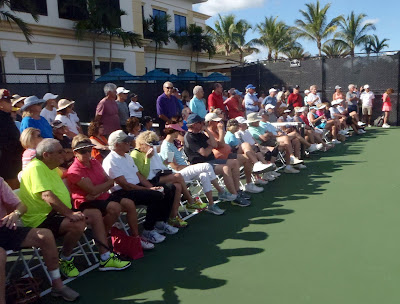 Ibis Country Club (a private community) which has always been big into tennis has now ventured into Pickleball. They have just completed building four new courts custom built just for Pickleball. Jill Sheahan (one of their tennis pros) coordinated the grand opening on December 12th.

The weather was perfect and close to 200 people were there to see what this strange new sport was all about. Many took the opportunity to try it and see for themselves. From the positive response, I expect that there will be enough to keep all the courts busy.

After years of work, this suburban Boynton (FL) community has a new sport

Bob Versalie says he was a “pretty decent” tennis player until the day he hurt his shoulder.

At about the same time, someone told him about the game of pickleball. He did some research, found a local couple who gave lessons, and visited friends in the northern part of the state whose development had pickleball courts.

Versalie, 84, learned that regardless of his injury, he can play the sport.

That was more than two years ago. The Coral Lakes resident has been championing for pickleball courts at the suburban Boynton Beach community since then and he is happy to say this month they celebrated the courts’ opening with a ribbon cutting.

The South Carolina Lowcountry area will soon have a new place to play pickleball. The Goose Creek Community Center, located at 519A North Goose Creek Blvd., Goose Creek, SC 29445 will begin hosting pickleball on Mondays and Thursdays from 9 a.m. to 1 p.m. starting  January 11, 2016. They will have two indoor courts set up for open play. It will be free for Community Center members, or $5/day for non-members. Call 843-569-4242 for more information, or visit www.goosecreekrecreation.com.

CLEARWATER – Down 7-0 in the tiebreaking game of the Men’s Singles Pickleball Gold Medal match in the 60-64 age group, Cape Coral’s Robert Welter called a time out. He leaned against the wall at the Long Center in Clearwater as if he was winded or injured.

Upon returning to play, he scored the next 12 points and outscored his opponent, Michael Thaler, of Briny Breezes 15-1 to win the third game 15-8 after splitting the first two games.

“I had to change the momentum,” said Welter. “He was dominating. I was just hoping something would open up.”

It looked to be Thaler’s year to win the gold medal as he advanced out the elimination bracket and defeated Welter 11-7, 11-8 forcing an if necessary game and jumping out to the early lead.

On the court next to Welter and Thaler, as the rest of the Long Center had cleared out, was the championship match in the 65-69 age group where David Warner, of Fort Myers won his fifth consecutive gold medal. He defeated Nolan Fagerburg, of Sarasota, in three games winning the final 15-8. Warner and Fagerburg met in the championship match of the 2013 Florida Senior Games with Warner winning the gold.

Another Venue for Brevard County

All levels beginner to advanced.
6-9 p.m. Pickleball paradise in a backyard? Watch this amazing story about how “If you build it, they will come” really happened to Tom and Ann Earley in North Georgia. You won’t believe the incredible generosity displayed to the surrounding community and the difference it’s made to not only area pickleball players but also to the Earley’s themselves.

CLICK HERE to listen to their story as you get a glimpse into some of the most amazing private pickleball courts in the country. 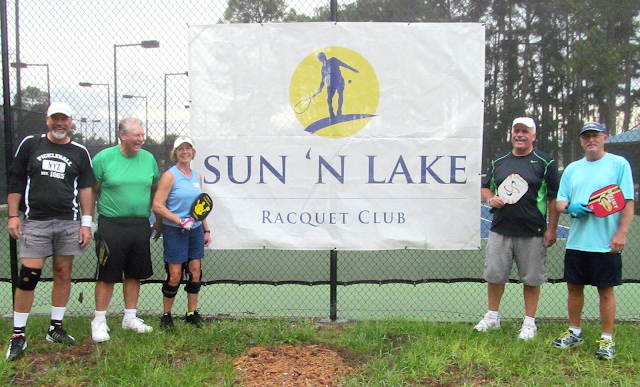 The 2016 Heartland Games for Active Adults Pickleball Tournament will be held at the recently refurbished Sun ‘n Lake Racquet Club on March 12 and 13. This will be welcome news to pickleballers who have had to endure play on the tennis courts at South Florida State College in previous years.

On a recent Saturday morning, eight players were on the courts by 8 a.m. and they were soon joined by other eager pickleballers. Judy Granger, of Sun ‘n Lake, was on the planning committee for the courts. She wishes they had the foresight when planning the new facility to rip out the old asphalt and start from scratch rather than trying to find cost savings by building over the existing tennis courts. She is really thrilled with the condition of the courts now.

Dave Shaner, of Highlands Ridge, comes to Sun ‘n Lake each morning and states “The new courts are excellent. There are no cracks and they drain exceptionally well. There has never been any water on the courts in the morning.” 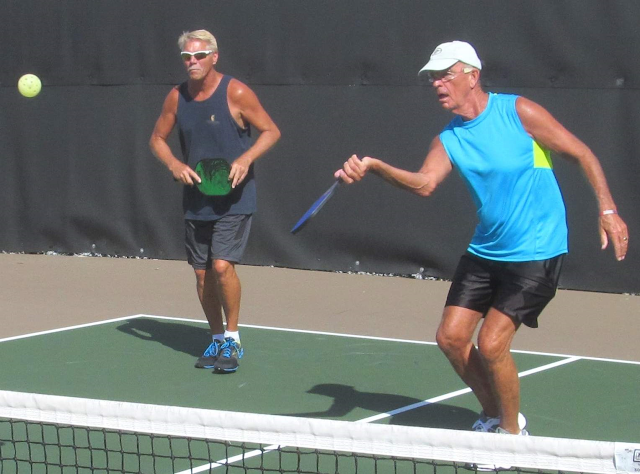 The 2015 Florida Senior Games begin in Clearwater on Saturday and conclude on Sunday, December 13. Nearly 2,000 athletes will be competing in 24 sports over the course of nine days. Since the Senior Games inception in 1992, Bradenton, Sarasota, Kissimmee/St. Cloud, Polk County, The Villages, Lee County and the City of Cape Coral and Pinellas County/Clearwater have hosted the Games.

There will be 14 athletes age 90 and over competing in the 2015 Florida Senior Games. The most experienced athlete, 95-year old Lucille DeGregorio, of The Villages will compete in Singles Bowling.

Over 200 athletes will participate in pickleball, one of the fastest growing sports of the Senior Games. Of the 21 Florida Senior Games Series Qualifiers, 17, including the Heartland Games now have pickleball competition. A total of 50 Florida pickleball players traveled to the 2015 National Senior Games in Minnesota over the summer.