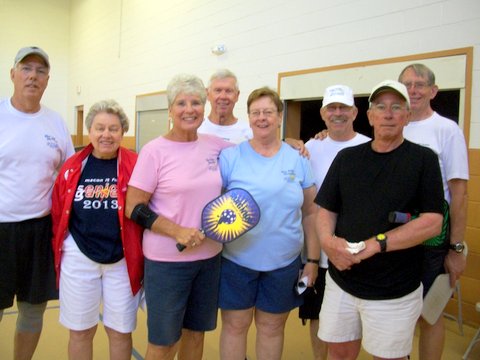 The Senior Games Pickleball Tournament was held April 22, 23 and 24th at the outside courts at the County Recreation Park. Singles for both Men and Women was played the 22nd, and the winners were: Gold - Paul Baillargeon, Silver - Ron Schott and Bronze - Larry Noyes in the Men's Division and in the Women's Division Nancy Falkenstein took the Gold, Joyce Jacques the Silver and Mary Mitchell the Bronze.

Tuesday the Mens and Womens Doubles were played at the National Guard Armory.

In the Men's Division the team of John Lumpkin and Mike Harris won Gold, Mike Falkenstein and Don Wirth took Silver, and Larry Noyes and Paul Baillargeon got the Bronze Medal.

The tournament was Double Elimination with 2 out of 3 games to 11 points in the Winners Bracket and in the Non-Winners Bracket one game to 15. This format allows players the opportunity to play more than one game ensuring every participant a fun time!

Anyone wanting information about Pickleball play in Franklin may contact either Jan Sharp at 828-371-0971 or Mike and Nancy Falkenstein at 828-369-9052. Summer play is at the outside courts at the Rec Park on Monday and Wednesday mornings.

To see more photos from the Games, CLICK HERE.