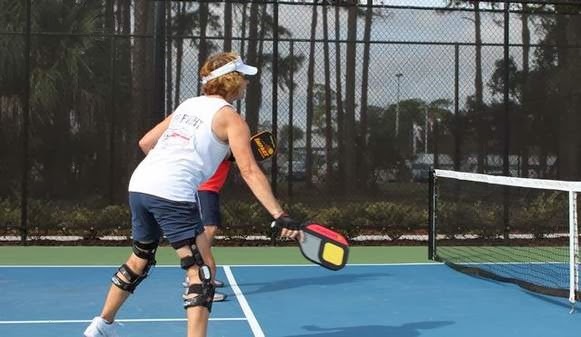 SEBRING - Judy Greve is on a three-month pickleball vacation in Florida from Kansas City, Mo.
Her goal is to play the game - described as a cross between ping-pong and tennis - most days she is here, even though she has to drive from Lake Placid to Sun 'n Lake.
Her destination is the newly remodeled pickleball and tennis courts in Sun 'n Lake, which apparently is one of only two public pickleball courts in Highlands County and can be used by non-Sun 'n Lake residents for a fee.
"This opens up pickleball to the whole county," said pickleball enthusiast and teacher Linda Kramer, during some downtime at the new courts by the Island View Restaurant.
Greve and Kramer are one of a few tennis and pickleball players making use of the newly renovated courts, redone after a $250,000 project.
There are four tennis courts and eight courts for pickleball players, said Sun 'n Lake board of supervisors president Dick Miller.
CLICK HERE to read more.
Email ThisBlogThis!Share to TwitterShare to FacebookShare to Pinterest