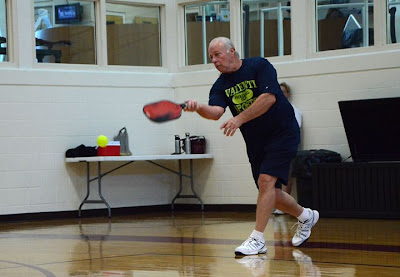 The popular senior game that is well known throughout Arizona and other parts of Florida is steadily growing in popularity at the New Port Richey Recreation and Aquatic Center. On an average day, the gym is packed with up to eight doubles teams battling it out in round-robin style format.

"It's a game that anyone who has played tennis, racquetball or badminton in their past can pick up very easily," pickleball league organizer John Hilliard said. "I found out about the sport on the Internet, played in a few tournaments and haven't stopped since. I think people like the competition, the exercise and the fun atmosphere of a pickleball game."