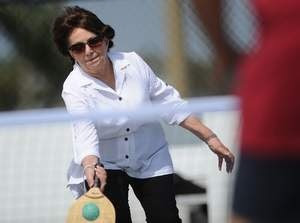 "Everybody I've talked to is trying to find another use for their courts," said Don Decker, Weston's park and recreation director. Weston included eight roller hockey rinks when its regional park opened in 2000. It has converted one to a skate park, but is debating what to do with the others, Decker said. Other municipalities, such as Davie, are considering adding turf for soccer fields. But the town also has painted three pickleball courts across a roller-hockey rink at one park.

Each state has at least one USA Pickleball Association "ambassador" -- an advocate -- to share information about games and lobby parks to get on board. Mitchell Ball, of Hallandale Beach, Fla., fell in love with the game during a visit to Central Florida and became one of 51 ambassadors in Florida.

READ MORE....
Email ThisBlogThis!Share to TwitterShare to FacebookShare to Pinterest