Pickleball by the Sea

April 8, 2013 - April showers no, but wind yes, was our challenge at the first Pickleball by the Sea Clinic. A total of 27 new players entered the courts to move through the different training stations and learn to play the game. The event was successful due a true group effort. A BIG THANK YOU goes to each of you who gave up your time to help others become pickled. The donations from the group ranged from ice, food, beverages, signs, setup, takedown, teaching, and more. 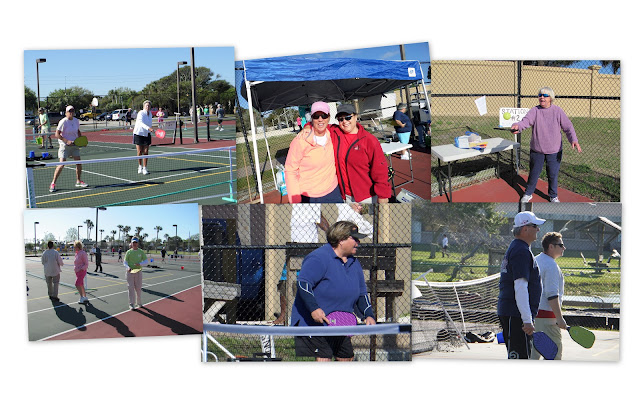 The donation jar brought in a little over $55.00. With monies collected from previous open play times we now have 2/3 of monies to purchase another net. Now that we have four courts at both Isle of Palms and Jarboe Park, we are in need of having the additional net. Donations $$ are voluntary, but ever so welcomed! Please note: at anytime someone wants to have a pickup game, the nets, balls and paddles are available to be loaned out. Contact me to make arrangements.
This morning after Dave and I marked off the courts at Isle of Palms Park, we both realized the temperature is getting warmer. We need to consider moving the play time to earlier on Saturday mornings. In addition, we need to converse about what time/day we want to play at Jarboe Park. Both topics will be discussed Thursday night at Jarboe Park and again Saturday at Isle of Palms prior to a decision of change is made.

Now that we have become a stronger unit of players, it is time to rank ourselves. Please read over the attached guideline and rank yourself. We will use the ranking to help establish playing partners, court usage, and opponents. We will ask you to rank, then play, then re-rank. Ranking will change as you improve your game. It also provides you knowledge of what level you want to reach and still have fun.

A shirt logo for “Pickleball by the Sea” is being developed to embroider on a variety of shirts: t-shirts, polo shirts, and tank tops. The fabric will be a cotton blend or a wicking material. We might be able to offer visors and ball caps too. Cost is still to be established. More information forthcoming.