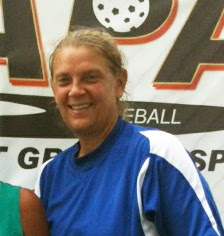 In late August, Anita Epperly became a very lucky gal. With the submission of her membership, Anita became our lucky 4000th member. The USAPA Board would like to congratulate her and wish her many, many more happy years of playing pickleball. Anita and the person most responsible for her increasing interest in pickleball will each receive a one year's extension of their membership plus a new shirt, rulebook and decal. Anita has designated Nancy Meyer from Fla.  ( pictured standing below with Cindy Eddleman).  Anita's story is another example of a former college athlete with two bad knees and a lot of pain. Now that she has two new knees she can play a sport that she loves – pickleball – without pain, and be competitive. Here is Anita’s story in her own words:

I am 52 years old and currently teach middle school in Michigan, as well as coach volleyball, and can't wait to retire so I can play pickleball year round. I was introduced to pickleball about eight years ago on a visit to Ft. Myers over spring break, but didn’t play again for a year. I thoroughly enjoyed the sport, but there was no place to play near my home, so I just played on spring break every year. In 2010, I started going down to Fla. three times a year and was able to play more frequently. I have fallen in love with this game. With Nancy Meyer’s encouragement I bought a portable net and introduced a couple of colleagues to the game. We put the net up in the gym at my school and play when we can. Last May I had double knee replacements and couldn't play until Christmas, and when I was finally on the court, you couldn't get me off. To be playing again and in no pain was the best. 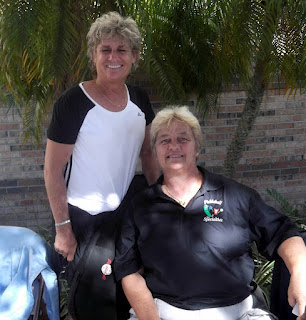 This spring I began competing in pickleball. My partner, Cindy Eddleman,  and I didn't medal, but a month or so later we played in the tournament in Royal Oak, Mich., and won a bronze medal in women's doubles 3.5 and my male partner and I won the mixed doubles on the same weekend. It was the best weekend and I am so hooked on this sport and impressed with the people involved. Cindy told me about all the benefits of joining USAPA, but I put it off for several days. It must have been fate that I became the 4,000th member. Until I retire I will play when and wherever I can and count down the days until my next pickleball encounter.
Email ThisBlogThis!Share to TwitterShare to FacebookShare to Pinterest