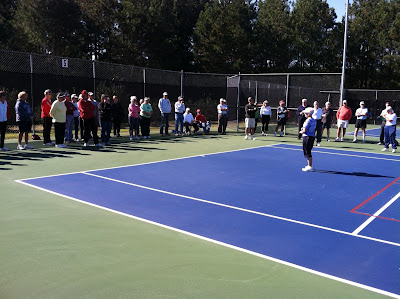 On October 11th, four Aiken pickleball players, Maggie Ward, Dick Keeler, Mike and I, went to McCormick, Sc to the Savannah Lakes Village community to give a pickleball demo.

Pam Royal, who is the Director of Recreation, called to see if we might be interested in doing this. There were 42 people who had signed up and it was an enthusiastic crowd! I gave a short talk on the history of pickleball, how the game is played, some of the rules, etc., and we followed this with questions/answers. Maggie, Dick, Mike and I then played a game to show the residents what pickleball in action looks like! Afterwards, we put paddles in the hands of those who wanted to try hitting balls, and there was good interest. 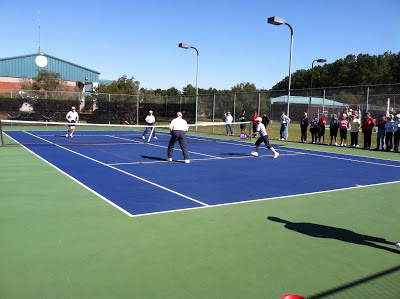 I have since heard from Pam that Sally Perkins, one of the residents who had played pickleball years ago, is now giving group classes twice a week. Sixteen players have signed up for the classes.

Eventually, we would like to visit each other's programs for some friendly competition.
Email ThisBlogThis!Share to TwitterShare to FacebookShare to Pinterest