Dick Freshley is one of our Palm Beach county ambassadors from Greenacres, and Josh Kalin recently joined him from west Delray Beach.  With their wives, the four  of them  are working to promote the game and generate interest.   One recent location where they introduced the game was at a community called Huntington Pointe, an active adult, private community in south Palm Beach County.  According to Dick, They (Josh and Harriet) are doing all the work to get Huntington Pointe going. Verna and I mostly just show up to play!

We had quite a crowd at our Saturday morning pickleball game at Huntington Pointe this morning. Eleven people, four who had never played before.  The 4 newcomers were just walking by and stopped to see what this strange activity was. We encouraged them to give it a try. Two were veteran tennis players and picked it up in a jiffy. Soon they were holding their own with us "pros." 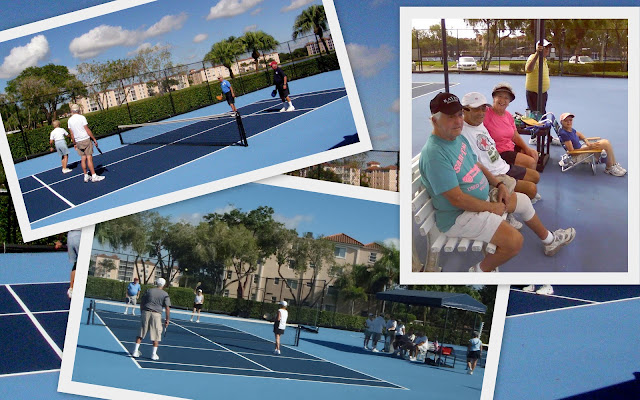 Huntington Pointe has a large tennis complex with eight counts and one paddle  tennis court; almost perfect for pickleball. Width is 20' (just right) length is 46' close enough for beginners).   We put down a piece of blue masking tape for the non-volley line and we are good to go.   We used the paddle tennis court and two adjacent tennis courts.

I am going to invite our representative from Palm Beach County Parks and Rec, He has promised us some public courts when we get enough interested people. I think we are there now.   I'd sure prefer a public facility closer to West Palm. Indoors would be perfect too.

But this is not the only location :  According to Josh and Harriett: We are trying to promote the game in individual communities amongst themselves. If this takes hold, perhaps there will be more Clubs interested in playing at various Clubs on a rotating basis or developing a public location in the Delray Beach area for everyone. We are in the process of scheduling a demonstration within our gated community. We'll see how it develops since we only have Har Tru tennis courts. We have set up our portable net on an unused street in a local park and have been introducing some friends to pickleball.
Email ThisBlogThis!Share to TwitterShare to FacebookShare to Pinterest