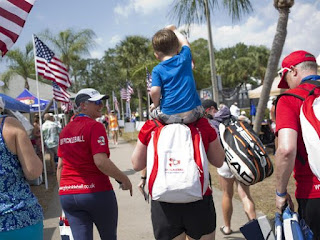 Nearly 1,000 players have descended on Southwest Florida from all over the country for what is the sport’s largest tournament ever. It’s not only people in town, but entire pickleball clubs that travel nationwide to compete.

Groups from Ohio, Tennessee, Indiana, Virginia and Utah popped their tents and flew their flags in East Naples Community Park on Friday. The clubs set up lawn chairs and dipped into coolers between the hundreds of skill-level matches during Day 3 of the U.S. Open.

“We all love the game,” said Mike Murphy, 61, who traveled with a group of six from Cleveland, Ohio. “We love the competition, and you need to travel to play the better players.”

While they came from all around to test each other, Sheena Maclean-Bell likely traveled the farthest to seek out top competition. The 39-year-old tennis coach crossed an ocean to be in Naples this week.