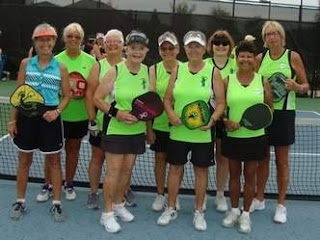 In 2011, the South Central Florida Pickleball League was formed to give players in various communities the opportunity to test their skills against other pickleball devotees. Local teams have done extremely well with Highlands Ridge taking the league title in 2013, 2015 and 2016 while Tanglewood captured top honors in 2014.

Each team in the league put four doubles teams on the courts to battle for supremacy. Although women were more than welcome to play, teams seldom had more than one or two women on a team of eight players.

From time to time, the ladies from Tanglewood, Highlands Ridge and Del Webb-Orlando got together for fun tournaments. This year it was agreed that the women needed to take the next step and have a more formal competition. Recently the three teams met at Del Webb. Each team fielded four pairings ranked from one to four. The top two teams from each community competed in the Tier One round robin with each team playing against the other five teams in games to eleven points. The remaining teams competed in the Tier Two round robin.

In Tier One play, the Highlands Ridge team of Donna Landers and Sandi Cisler plus sub Susan Price and the Tanglewood pairing of Sandie March and Tracy Vernesboth took 50 out of a possible 55 points but the Ridgers were awarded first place having defeated the Tanglewooders in their match. Tanglewood’s Alisa Blackburn and Tracy Smith combined to take third place having accumulated a total of 46 points while Sue Schinderle and Ellen Nesbitt (a recent defector from Tanglewood) plus their sub, Susan Shaner, finished fourth with 43 points.