Pickleball easy to pick up regardless of age, athleticism 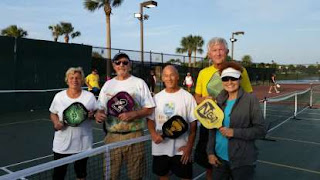 Invented on the west coast, pickleball shot across the nation in recent years and is now rallying a growing fan base in Neptune Beach.

The quirkily-named sport combines tennis, badminton and pingpong into a fast-paced game that can be played inside or outside. In Neptune Beach, however, pickleball aficionados — and pickleball amateurs — gather almost daily at Jarboe Park, which boasts the largest concentration of courts in the area. The outpouring of response since the beachside city began offering pickleball is unprecedented, according to the Senior Activity Center Director Leslie Lyne.

Coming in May, the city plans to hold its second pickleball tournament in Jarboe Park as a small fundraiser for the Senior Center. The event will be held May 14 from 9 a.m. until 5 p.m., and city staff expects approximately 75 players to participate. Both the tennis courts and the pickleball courts will be unavailable for general use that Saturday.