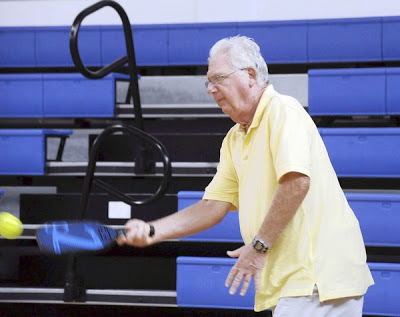 "We are finding that snowbirds from New Jersey, Wisconsin, Michigan, Illinois and guests from Durango, Colorado and Taos, New Mexico, are familiar with it," said Harriet Kalin, 74, who tore a knee ligament playing competitive tennis, and now enjoys pickleball. "It's physical. It's social and it's competitive."

The Kalins said they play on Tuesday and Thursday mornings at the Delray Beach Community Center, 50 NW 1st Avenue, Delray Beach. The times are from 9 a.m. to noon.

About 20 players gather twice a week, said Josh Kalin, 76, who is registered with the USA Pickleball Association as an "ambassador" for the game. There are more than 300 such ambassadors across the United States.

READ MORE....
Email ThisBlogThis!Share to TwitterShare to FacebookShare to Pinterest