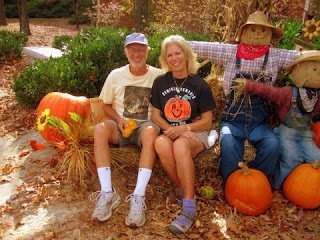 Pickleball tournaments hosted and directed by Tom and Ann Earley and the North Georgia Pickleball Club are known to be some of the very best in the ASR, and this year's Halloween Pickleball Benefit Tournament, held on Saturday and Sunday, October 29th and 30th,  was no exception.

According to Ann at the end of day one,  it was a .."Great day for Pickleball - if we could have eliminated the wind factor!"  Today's Pickleball teams came from Lake Arrowhead (Lana Chadwick,Bill and Carol Hess), Chattanooga, TN (Dennis Hart, Kirstin Beasley),Woodstock, Canton, Marietta, Dallas, and Acworth.

Day one winners were .. the"Ghosts" (Buzz Ahrens and David Barron) defeating the winners of the"Goblins" (Floyd Moody and Bill Whatley). Presenting the Halloween pumpkin shaped platter filled with "Chocolate Fix" truffles to David and Buzz is Tom Earley." (pictured below) 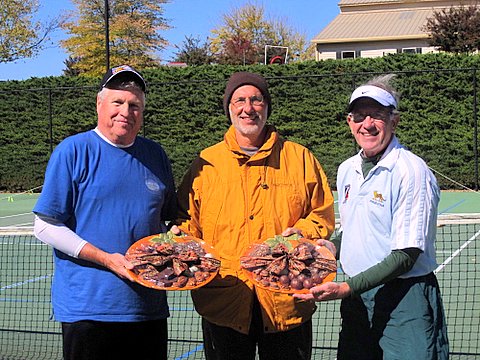 "There was a presentation of $500.00 from the tournament players and the North Georgia Pickleball Club to Ottis Moore of the Cherokee County Humane Society. Another contribution was made to the Air Warriors Jr. ROTC of Teasley Middle School. The Air Warriors gave a rifle presentation and  led the grand  Opening Ceremony with their flag corp. Tenor Ken Terrell sang the National Anthem and the games began." 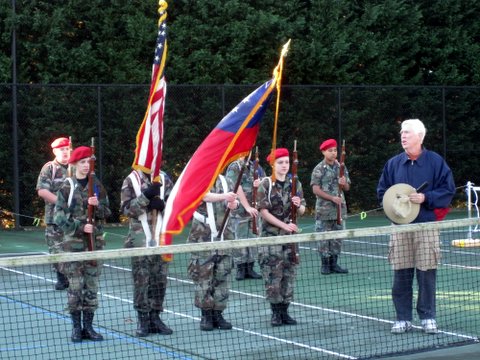 The tournament continued on day two with the Vampires!"What a perfect day for Pickleball! We had our 4.0-4.5 skill level"Vampires" play with the finals between Tom Earley (Canton, GA)/Milton Myers (Lawrenceville, GA) vs Jeff Hudson and John Wilson (Opelika, Alabama). The winners (pictured below) were Jeff Hudson (in the white shirt/navy sweatpants) and John Wilson (the other one - navy shirt and sweatpants). Last year they only brought one team and this year they returned with two. Great players, great athletes, and all-round great
sports to drive 4+ hours for a bag of "treats"! 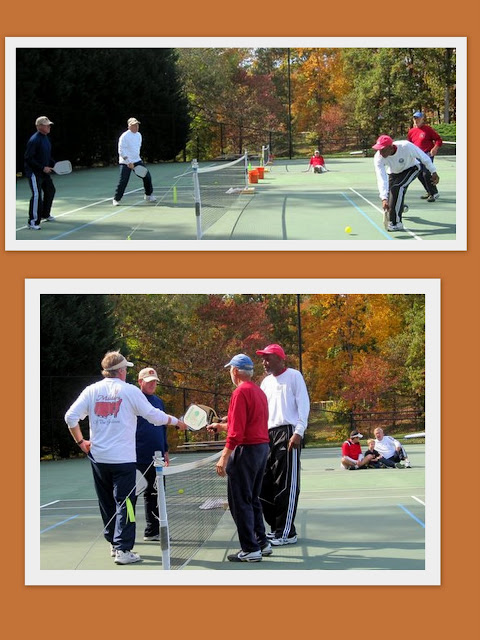 "Most Improved team won yodeling pickles - Jimmy Williamson and Dan Ross
(Marietta, GA)    ....."Bocce, the official Atlantic South Region Pickleball Mascot, was in attendance during the tournament as line judge.  He was also quite impressed (as you can see below) by the winners of the "most improved" on Sunday (4.0-4,5 skill level).       Or did he actually want their yodeling pickle ?

We had two teams of father/son - Steve (Marietta, GA) and
Mark Morneau (Michigan) and Buzz and Jason Ahrens (Canton, GA).

And finally - pictured below , with THREE generations of Pickleball Players is the Morneau family.  Pickleball players - Michigan resident Steve Morneau (white shirt), Jane and Mark Morneau, parents of Jensen (3) and Tanner (5).  Pickleball certainly is a game for the whole family - no matter what your age may be!!

A special thank you to everyone who helped Tom and Ann make this tournament a success!
Mark and Kate Perrie (Arizona) -  Court Preparation, covering the courts, taping the edges and aligning "drainage" boards.
David Barron -   Helping to tap re-tape the courts and for the supply of  water for the tournament.
Lana Chadwick, Don and Regina Lucas - Additional Humane Society contributions.
Kee Kai Ruckstal who brought a platter of fudge and a mound of biscotti from
Tennessee!
Jenn and Dawn Barron who shuttled ice to the giant cooler with water on the tournament days. Another great Pickleball family who recently moved to Georgia from Arizona!
Canton Holiday Inn Express for accommodations for our Tennessee and Alabama players.
Lynn Wingfield/"Chocolate Fix" for the Awards.
Carole and Bill Hess who monitored the score sheet, helped serve lunch, orchestrated clean up, and generally made themselves available
throughout the tournament.

"With such wonderful friends and players, holding a tournament
has been very easy!"  Ann Earley

CLICK HERE for our photo gallery and for all the pictures from the tournament
Email ThisBlogThis!Share to TwitterShare to FacebookShare to Pinterest