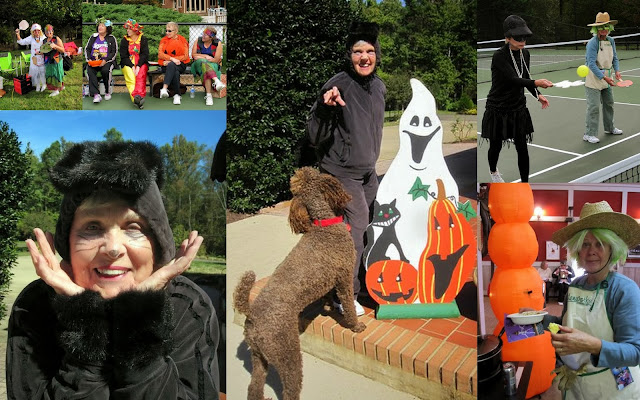 What perfect weather on Saturday afternoon for about 30 Pickleball players! It was great to have Stephanie Lane, Joe Gilmore, Maggie Corbin, and Ke Kai Ruckstuhl join us from Tennessee plus Renate & Stephen Hess from Houghton/Deaton Creek, GA. After a few hours of round robin, everyone put their costumes on for a few last games of "dinking" competition using paddles with the shapes of pumpkins, ghosts, and black cats.

Thanks to the hard work of NINETEEN chili chefs, from around North Georgia and two from Tennessee, the Pickleball players ended the tournament and adjourned to the stable for the chili cook-off. Additional members of the community joined in for the competition - Sharon Thomas from Dahlonega, Weston & Denise Richter from Beverly Hills, CA, Donna & Jim Walters from Marietta, Marnie Tait from Canton, Ray & Louise Irwin from Hickory Flat, plus Water Tank Road Neighbors Marla & Jeffrey Doss, Donna & Greg Goodall, and Dottie & Jim Frassetto. Fabio & Sabine Yeppes/T.C. Country Purina Store in Macedonia not only competed in the chili contest, but supplied the crowd with the delicious Belgian brandy filled chocolates from their store.

Marnie Tait won the cook-off prize of $25.00 and a gourmet soup tureen with her "Black Bean, Sweet Potato, and Quinoa Chili with Smoked Chipotle Crème.

Weston Richter and Renate Hess were recognized for their 60th birthdays during the past few days.

See you on the courts at the 10 a.m. Monday/Wednesday/Friday/Saturday new Fall time. With winter temperatures coming soon, we may begin play later if the members desire.