Pickleball Club Raises Over $15,000 for Hope For The Warriors! 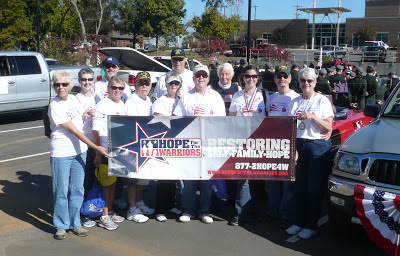 Tournament Fundraising chairperson, Donna Maguire, set the bar high this year when she set a goal to raise $10,000 for Hope For the Warriors. Maguire organized a 5k fun run, pickleball marathon, and silent auction, and sold souvenir t-shirts and string backpacks. Each event moved the Club closer to its goal. In addition, sponsors generously gave money and gifts in kind, including delicious snacks for the Veterans' Invitational Tournament.

Months of planning and hard work paid off. When all the money was counted, members of the SCCL Pickleball Club had raised over $15,000. Accepting the check at the tournament banquet, was Duke graduate and former NBA star, Jack Marin of the Baltimore Bullets. Marin, who is a member of the Board of HFW, expressed his appreciation and admitted he had never heard of pickleball before. He promised to give it a try. 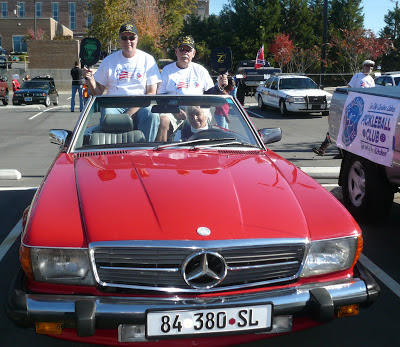 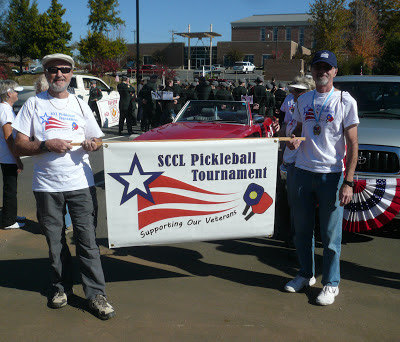 When it was suggested the Club participate in the Lancaster, SC Veterans' Day Parade, we realized it would be a great opportunity to promote pickleball as well as support our veterans and foster goodwill in the community. We quickly rounded up an enthusiastic group of marchers and two decorated vehicles. Local ambassador, Jane Harvey, with help from USAPA member, Martha Burgess, created mini pickleball key rings to pass out to the crowd. Attached was a business card with the tournament logo, information about Hope For the Warriors, and instructions for finding out more about pickleball at the USAPA web site. The key rings were very popular, and with many folks asking “What is Pickleball??” and promising to check it out.

(Pictures Club members; pose behind the Hope For the Warriors Banner; Veteran Beauties wave their paddles to the admiring crowds from the back of Martha Burgess' hot red convertible; The tournament banner carried by USAPA members Fred Harvey and Roy Williams.)
Email ThisBlogThis!Share to TwitterShare to FacebookShare to Pinterest