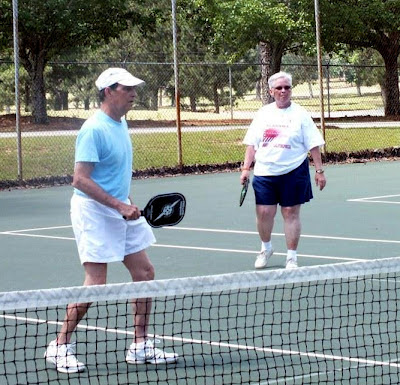 A pickleball demonstration was held on Saturday May 5, 2012, at the Indian Pines Golf Club tennis courts in Auburn, Alabama. The courts have pickleball lines painted on them.

These courts will be the place for the 1st ever Alabama Senior Olympic pickleball tournament to be held on the 19th of May. There were eight people, so I was happy. 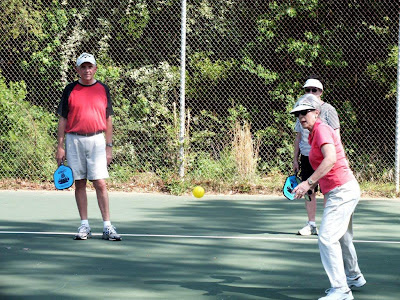 The people that came were divided into 2 groups - those who had some experience and those who had no experience. The newbies were sent through a group of drills from dinking, volleying, serving, to hitting ground strokes.

Players were instructed on how to line up for doubles, scoring, and moving on the court. There were 2 instructors - Bob Huskey, USAPA ambassador for Lee County Alabama, for the beginners, and Sam Bailey, an experienced player, worked with those who had some experience. All agreed that pickleball is a very fun game!
Email ThisBlogThis!Share to TwitterShare to FacebookShare to Pinterest