The most serious thing about the Monday morning gathering of pickleball players on the new courts by the Sun City North Lake House was the determination to have a good time.﻿
﻿ 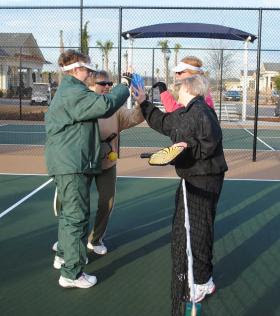 ﻿
Photo by Gwyneth J. Saunders/The Sun Today "Good game!" Barbara Stern, left, Jan Fierick, Patty Smith and Jenny Willis finish a laugh-filled and fast-paced game of pickleball.﻿
......They've all been bitten by the pickleball bug and it is obviously contagious because the club now numbers about 800 members and is growing. The new courts that just opened near the Lake House in Sun City North have greatly eased the panic for playing time.

READ MORE
Email ThisBlogThis!Share to TwitterShare to FacebookShare to Pinterest