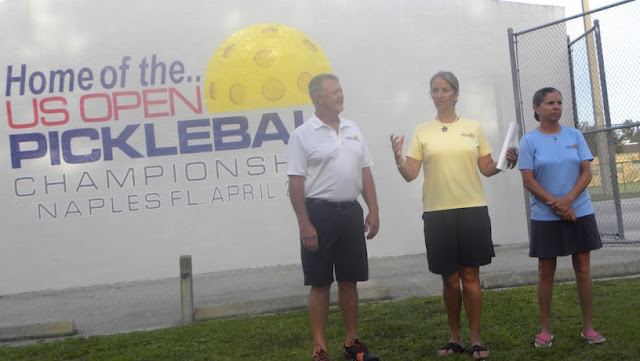 On Wednesday morning, a backdrop that was brought to the forefront of discussion was unveiled at East Naples Park, those in the crowd commemorating the host site that will bring the first-ever U.S. Open Pickleball Championships to the community in 2016. Today marked the first visible sign of what will become April 26 to May 1.

Ironically, a racquetball barricade painted the artistry of the event’s first-look logo; one that officially opens the door for prosperity.

“We want pictures being taken here and for people to bring them back to their communities for the years to come,” the event’s President, Terri Graham said.

“We are looking for the flesh and metal to be in Naples. This will allow us to make East Naples Park the Pickleball capital of the world,” Graham proclaimed as she spoke on what the weeklong showcase means to Naples and the surrounding area.

In her presentation to the spectators that listened to the President’s 8:00 a.m. introductory remarks, Graham shed light as to just how popular the brand of Pickleball has become all across the world, saying that there are 2.5 million players this year and that number is projected to grow to 5 million participants by next year.