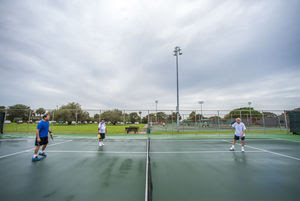 Name That Game: It’s like tennis – sort of. And like badminton – sort of. To play, you use a sort of whiffle ball and a sort of ping-pong paddle. And it might or might not have been named after a Cocker Spaniel. But probably not.

Give up? It’s Pickleball, considered one of the fastest-growing sports in the country, with more than 100,000 active players in all 50 states. They’re folks of all levels of athletic ability, most ranging in age from 30 to 80 – and up!

Pickleball, so the story goes, “was invented during the summer of 1965 on Bainbridge Island, WA, at the home of Joel Pritchard (Congressman from Washington State). One Saturday afternoon, Pritchard and two buddies, Bill Bell and Barney McCallum, returned from golf and found their families bored.”

When attempting to set up a badminton game, no one could find the shuttlecock or racquets, so they improvised with ping-pong paddles and a whiffle ball and lowered the badminton net. They soon set up rules and built a permanent court in McCallum’s back yard, always keeping in mind the original purpose – to create a game the whole family could enjoy. And the rest, as they say, is history.

The pickleball court area is one-third the size of a tennis court, with play similar to that of tennis, without the intensity or speed. Like tennis, it can be played with two or four players. Its similarity allows existing tennis courts to easily be converted to dual-use with additional striping.

The USA Pickleball Association (USAPA) promotes the growth and development of the game on national and international levels.

Efforts to bring pickleball to Indian River County began in Sebastian and Vero Beach about a year ago, with the county soon joining the Pickle Bandwagon. Recreation Departments in Vero and Sebastian have converted some of their tennis courts to dual use with the addition of special striping, and the number of players continues to grow.