The South Central Florida Pickleball League has been in operation for five years. Although there are women competing in the league, they are far outnumbered by the men. At times, there have been friendly matches between ladies from various communities. On January 31st, history was made when Tanglewood took four women’s teams to Del Webb/Orlando to compete using the same format as in league play. 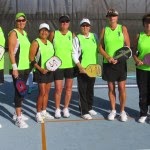 Each club rated their teams A, B, C and D with each pair competing in a round robin series, earning more points for matches between similarly ranked teams. It seemed that the women all enjoyed the friendly, yet strong, competition. The Tanglewood team took three of four games in each of the first three rounds and swept the final round where the greatest number of points is amassed, taking 58 of a possible 67 points on the day’s play.