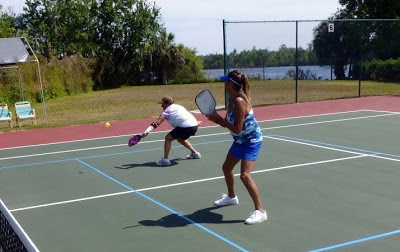 The morning qualifying round started at 9am and matched players with a new partner randomly against random competitors in each of three games to 15. Player’s scores were recorded from each game and each player’s total score for the morning was used to seed them into the afternoon double-elimination bracket tournament.  Above, Phyllis Schnell (L) and Babs Haggerty, both from Solivita, compete in bracket elimination action early Saturday afternoon on March 9 at Cypress Cove.

Players were matched with others who had equal or similar scores and were paired as partners for the afternoon. All 24 players then played a standard double-elimination tournament for Gold, Silver and Bronze medals. Play concluded at 3pm after some very exciting finals-round matches.

All 24 players enjoyed a wonderful day of vigorous competition and camaraderie. Everyone was able to play a minimum of five games to 15, with many teams playing as many as 9 games before the champions were crowned. 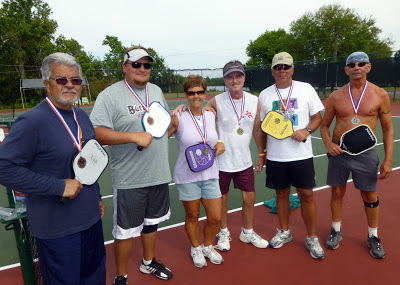 Interesting notes about the champions: Don Kelleher took Silver at last year’s 4th Annual; Tammy Brown, the only female in the finals today at Cypress Cove, also earned a Bronze in Women’s Doubles 55-59 on the prior Tuesday at the Polk County Senior Games at Solivita. Brendon Smith is just 26 years old and played in his first tournament today! 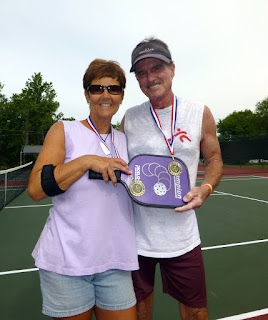 Pickleball is gaining steam every month at Cypress Cove, where we play at least five mornings a week year-round in a tropical garden setting next to a private 80-acre lake. Contact Mike Sullivan at pickleball@me.com for information on visiting and playing pickleball with the fun, friendly folks from Cypress Cove!

Pictured are the Gold Medalists Tammy Brown and Don Kelleher.
Email ThisBlogThis!Share to TwitterShare to FacebookShare to Pinterest