I got this email from Dick Freshley, our ambassador in Palm Beach County, Florida not long after the article about pickleball at the Palm Beach Kids Festival was released in the news.  This is a story about the history of these paddles.  I enjoyed reading this so much that I just had to share it with all of you.

"Regarding the Sun-Sentinel story. Great photo of the racquet which is one I made. When I started the game at Boeing in the '60s, there were hardly any commercial paddles available. I took up a collection among interested parties and bought a full 4' by 8' sheet of 3/8" AA mahogany marine plywood. It cost $20, which was a big deal in 1966. 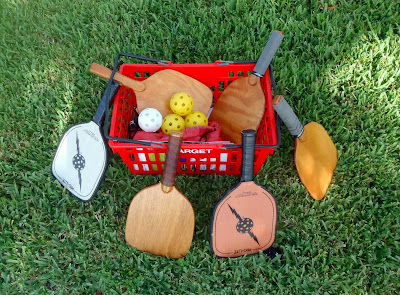 I must have made 20 paddles from that sheet, one for all the donors and several others for later needs. I kept six for myself which have had good use. I wrapped the handles of some with tennis grips, which makes them better. Shortly after, a local entrepreneur began making them. And coincidentally, the material used was scrap floor panel materialfrom Boeing. I did some development with the Floor Panel manufacturing unit and, if I had been more alert, I could have gotten a lot of that material free. It could also be purchased at the Boeing Surplus Store for next to nothing. Alas, by the time I woke up the process had been moved to Spokane, WA 300 miles away. Now the panels are made in Mexico.

Ironically, one of the jobs I was working on was a Neumerically Controlled machine to cut out the panels. One of the features was nesting software to maximize the use of the material. It was all test and I could easily have programmed a bunch of nested PB paddles. I did use the opportunity to cut a custom rudder for my sail boat.

Floor panels are the most customized feature of a commercial airliner. Almost every plane is different depending on a number of factors; passenger, freighter or convertible, seat spacing (AKA pitch), lavl ocations and size, galley location and size, etc., etc. The material used for commercial planes is a fiberglass honeycomb sandwich called Nomex. Freighters have the same type of construction but the core is aluminum. Both are very strong for the weight which is a big consideration for planes.

The Nomex paddles were made by a start-up company formed by a couple of Boeing employees from my plant. It was called Pro-Lite and they gave me a couple of their first products to test.

So much for ancient history. I hope you found it interesting."

Amazing!!!    Thank you Dick.
Email ThisBlogThis!Share to TwitterShare to FacebookShare to Pinterest