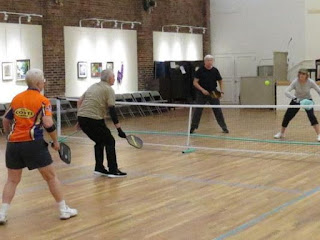 On Wednesdays and Fridays, starting at 11:30 a.m. and through much of the afternoon, the sounds of whiffle ball whacking followed by echoes of laughter are emitted from the 2nd floor auditorium of the Senior Center. That delightful sound is Pickleball.

According to Lynda Dickens, volunteer group leader, Pickleball was designed specifically for active adults in 1965, and is a cross between tennis, badminton and ping pong. Lynda thinks the sport mostly resembles tennis as the layout is similar to a tennis court but on a smaller scale. Pickleball is played with partners, but your partner can change from game to game.

Pickleball appears to be an economical sport as well as, “Most people wear T-shirts and shorts with the priciest item being a good pair of tennis shoes,” says Lynda. I have even witnessed people playing in casual work attire, with sneakers. To play, you use a whiffle ball and a paddle, specifically made for Pickleball, as your racquet. If you don't have a paddle, TSC has some you can borrow, and it is only $2 to play!