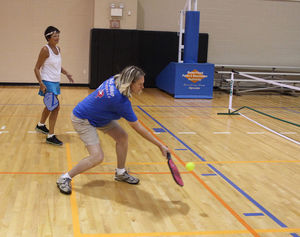 The No. 1 rule for playing pickleball is to have fun.

Also, do not question the legend of how the 50-year-old sport got its unusual name.

“The rumor, the cutest rumor, anyway, is that it is named after a cocker spaniel,” laughed Bob Hood, president of the Coosa Valley Pickleball Club.

The favorite tale is that when the game was started, a cocker spaniel named Pickles owned by one of the men chased the ball constantly.

“That isn’t actually true,” admitted Hood. “But we’re going with that version.”

The sport is a combination of tennis, badminton and ping pong. It is played with paddles, a short, modified tennis net and a plastic ball. It can be played indoors and outdoors and by a wide range of ages.

Pickleball got started in Rome in January, he added.