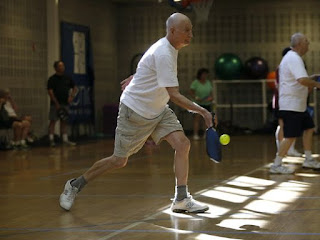 Ever heard of pickleball?

Don’t worry, by the time a group of dedicated enthusiasts at Premier Health & Fitness Center are through, most of Florida will be playing what can only be described as “a combination of tennis and badminton with a wiffle ball and ping pong paddles.”


It’s a game just about anyone can pick up, and given enough time, anyone can rise through the ranks and become a national champion.

Walt Cofer, 56, started off as a racquetball player and said he immediately became addicted to a sport that’s only about 5-years-old in Tallahassee. Pickleball was invented by Joel Pritchard in 1965 on Bainbridge Island, which is close to Seattle, Washington.