Pickleball is Coming Along in Palm Beach County, Florida

Ambassador Josh Kalin, Delray Beach, and wife Harriet, handled the Demo/Clinic that was held recently at the YMCA in Boynton Beach, Florida. Thanks to players, Bob Wybinow, Eileen Tuckman, Karyl Lewis, Richie Liss and Steve Levine for their help. People were surprised at how relatively easy it was to learn. Officially the sport will be part of the activities program on Tuesdays and Thursdays from 9 – 1 p.m.

In addition, Ambassador Dick Freshley and Art Pumpian were responsible for having the Demo/Clinic at South Olive Community Center, West Palm Beach. Helping out were: Ambassador Bob Friedman, Charlie Linkov and Bob Wybinow. Play will be Friday mornings. Art recently taught some youngsters to play. Who knows, maybe there will be open time for the kids on weekends.

Avid players are patiently waiting for the eight courts to be built and Caloosa Park, Boynton Beach, FL. These will replace the three that were used in the practice area between two hockey rinks. What a group of fun players!  Everyone squeezed in for this shot. 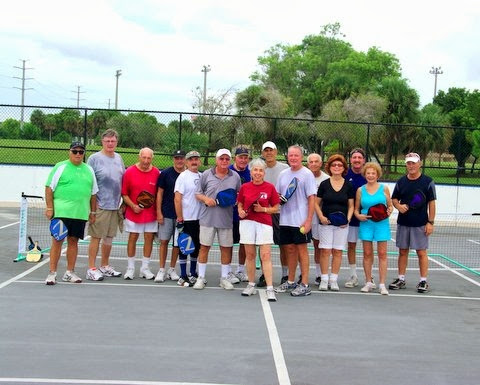