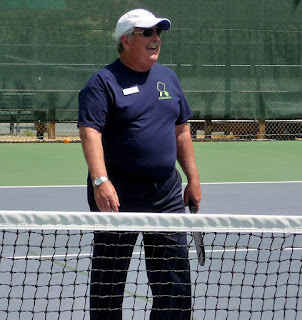 
I am originally from central New York State and spent my entire career in various positions in the technical computer market.

I spent 25 years in Fort Lauderdale, Florida with my wife, raising our two girls, before retiring in the "Golden Corner" of South Carolina in the active adult Golf and Country Club community of Keowee Key on the shores of Lake Keowee. The accepted term for “northerners” leaving Florida to retire in the Carolinas is "half backs"!

I played competitive table tennis extensively in college (Syracuse University) and a bit of tennis and racquetball along the way, all of which I found easily translated to pickleball. I learned of pickleball from my neighbor 2 1/2 years ago, who "winters" in "The Villages" and we found a very helpful group that played in nearby Greenville. ("The Upstate Pickleballers")

Once I played, I was "hooked" and we established a temporary court in our community (chalk/tape) on a concrete patio next to our indoor pool. We held a series of resident orientations and training and started a group. We grew rapidly, to the point where we were successful getting our POA Board approval for professionally lining two of our tennis hard courts.

Over time, the numbers interested in the sport exceeded 100 and were outgrowing that facility, thus were able to promote and obtain (major capital community project) four dedicated/lighted courts that are due for completion by the time this is in print. Our POA Board views it as a new exciting amenity which increases our competitiveness.

We have promoted 3 other local communities to start the sport and we have had several reciprocating visits for competition and camaraderie, including our original "mentors", The Upstate Pickleballers.
Email ThisBlogThis!Share to TwitterShare to FacebookShare to Pinterest