"We just finished a tournament here at Indian Creek Resort, Fort Myers Beach, Florida today March 24, 2012.   Had 19 teams of mixed doubles. Rick Stoecker was the director of tourney which was for residents of the Resort.   Played all games to 11 win by two and with teams playing best out of three games.   Tourney took a little over 4 hours as we have only two court at this time.

Prior to play Sandy Griffin, our Committee President, honored our oldest player, John Geni, a WW II veteran (92),with a photo certificate and Resort Pickleball "T" Shirt.   This player had just mentioned the day before that he thought next year he would need a new paddle as the one he has is 8 years old.   You just got to love his enthusiasm and optimism. 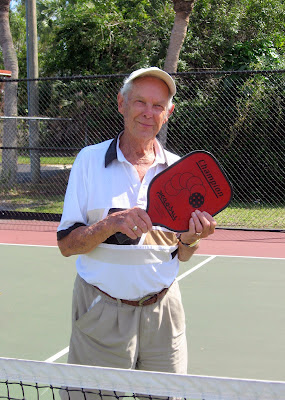 The winners of the tourney were Andy VanVliet and Jeanne Blanchard. First runner up team Jim Ashley and Phyllis Reisgies. Second runner up team of Bruce Wade and Kathy McDonough.   All teams were picked by blind draw. These players are from all over the country and Canada who winter here in Fort Myers Beach. All the other players and spectators enjoyed watching some pretty intense Pickleball play on one of our warm sunny Florida days. 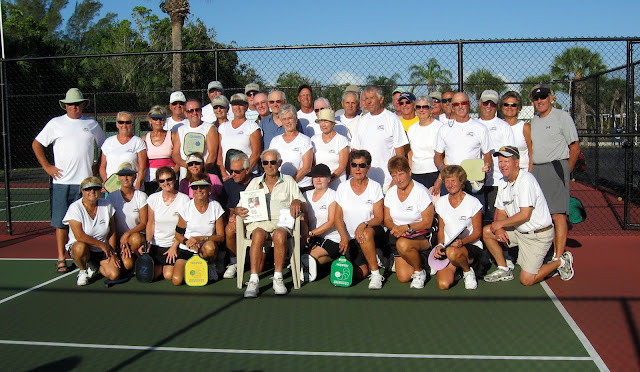 This will be our last competition for the season. Our Group here in the Resort has grown over the last 8 years of play here in the Resort. There are now over 120 completive players and probably another 60 social players with new players coming on all the time. This next season the Sun Communities Indian Creek Resort is to have a third court ready for us with hope on the fourth court soon after that.
The number of players and the level of play here in the Resort has been great. This game is a specific draw of new residents to this Resort each year. Rumor has it that some pickleball players have  moved here from the Villages."
Email ThisBlogThis!Share to TwitterShare to FacebookShare to Pinterest

Your writing has impressed me. It’s simple, clear and precise. I will definitely recommend you to my friends and family. Regards and good luck