A Plan to Introduce Pickleball to Your Community

Bill and Kim live at the Herons Glen community in Ft. Myers, Florida. Pickleball is played all around the area, and they are well on there way to getting their community on board and included in all the fun. 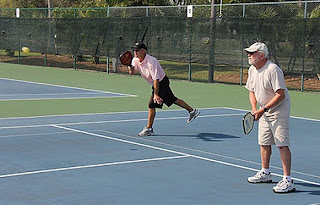 They began in January of this year running "clinics" at 4:30 on Tuesday afternoons. They put a broadcast on the community television.
"In the last 5 weeks, we have had 85 people join."
Ft. Myers Ambassadors Nancy Meyer and Cindy Eddleman " have run three beginner sessions already and are in the process of scheduling an intermediate and two more beginner sessions. They are both fabulous and most helpful. With the help of Nancy and Cindy we have graduated to running three courts of round robins on Tuesdays and then having three "clinic" type courts as well, using all six of our tennis courts. New people continue to come each week.
Our community hosts a cancer fund raiser every January and our pickleball demonstration had 408 people in attendance so we believe there is a great interest in our community.

I will present to the Recreation Board this Monday to be named a "group" within Herons Glen. It is the first step in developing our program. We currently tape off tennis courts. Our recreation committee has put dots on the tennis courts so we don't have to re-measure each time we want to use them...which is a start."


The two  pictures were send to us by Bill and Kim, and  are of the clinic and the round robin play.  It certainly sounds like they are well on there way to having a great group of players, and we'll keep our fingers crossed that they get support for the courts from their community Recreation Board.    They are "most open to any help/suggestions to help them get pickleball off the ground in our community!