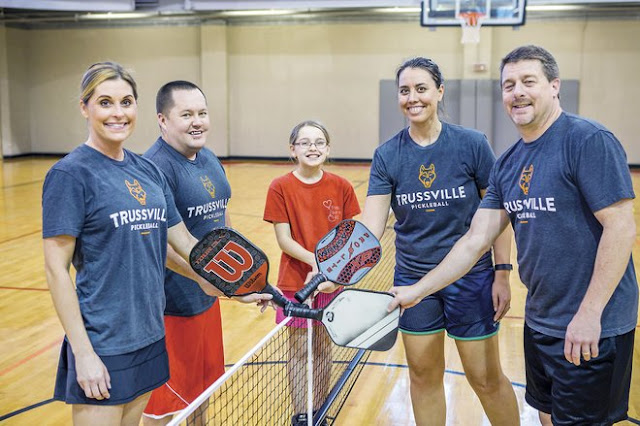 Enjoy tennis? Try an underhanded serve, requiring the ball to bounce once after a serve and return serve, and imagine only being able to slam a shot when more than seven feet away from the net. Now, shorten the racquet, shrink the court and substitute the ball with a Wiffle-type ball. That, in short, is pickleball, an action-packed sport taking the Trussville community by storm.

“It’s like playing ping pong standing on the table,” said Jarick Rager, who hosts TrussvillePickleball.org, a website that serves Trussville’s four pickleball locations. “Within Birmingham, it’s beginning to catch on and grow, and pretty soon it’s going to take off in a big way, and we’re kind of at the forefront of it all.”

Rager is one of four tournament co-directors from Trussville, along with Forrest Bender, Jodi Krayer and Erica McNeal, who are organizing the community’s first tournament, the 2017 Trussville Pickleball Charity Classic, March 17-19 at CrossPoint Church. The charity event aims to help grow the sport while benefiting two local charities — Trussville-based Faith Like a Child and Special Equestrians in Indian Springs.