Get hooked on pickleball 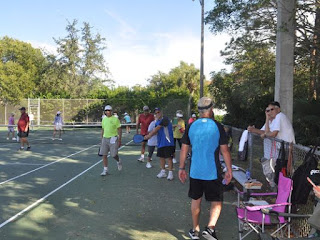 started at Veterans Community Park in North Naples one year ago with 15 players. Now there are more than 300 registered to play. On most mornings, the eight courts set up on tennis courts are not enough, so players sign in and wait their turn. This week construction is expected to begin on eight permanent pickleball courts at and are expected to be completed in January.

In East Naples the 25 courts at the community park are so overcrowded with the more than 400 players that plans are underway for that park to have 48 courts.  expect the number of players to continue to grow rapidly.